For fun, I ask Yolanda Evans halfway through our phone conversation to list some of the side hustles she’s had while working as a freelance journalist and digital nomad.

Because by this point, it’s clear that Evans, whose byline has appeared in Travel and Leisure, Eater LA, Thrillist, Wine Enthusiast, Food52 and Refinery29 (see her portfolio here), has not followed a linear career in journalism, or life in general for that matter.

There was the time she gave massages in bars; worked at a bookstore; 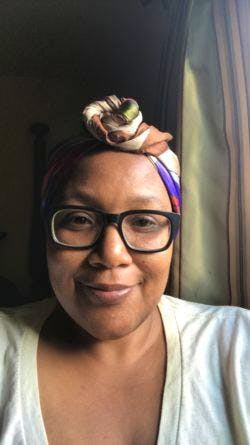 managed Airbnb properties; cleaned houses; and worked at half a dozen hostels.

Then there was the time she volunteered in a medical experiment that involved drawing blood, sitting in a car with a smoker and getting MRIs.

All of these jobs would be remarkable enough; but for many of them, Evans was living in cities like London, Dublin, Prague, Morocco and Belfast.

It’s a byproduct of what she refers to repeatedly as her “restless” nature; her resistance to conformity and the banal; and her desire to live abroad and seek out new challenges.

It’s also a lifestyle choice that allows her to recharge, fuel her creativity, and cross paths with people she otherwise wouldn’t meet, she said.

Evans is the archetypal digital nomad, living out the dream of many travel journalists and writers. Except that while others may hem and haw about buying a plane ticket because of responsibilities like family, mortgages or because they’re risk-averse, Evans is single and adventurous and doesn’t think twice about taking the leap.

Here’s how the American freelance writer, now based out of Berlin, has managed to live abroad for years at a time — without relying on a trust fund or a spouse with a steady income.

After graduating from J-school in New Orleans in 1999, Evans says she deliberately tried out different jobs here and there before committing to a career in journalism.

“I wasn’t sure I wanted to do journalism for the rest of my life, I was still young and I didn’t want to put all my eggs in one basket,” she said. “I did everything else, retail, volunteer work, a whole bunch of jobs because I didn’t want to start off in journalism and hate it by the time I was 30 and have a pre-midlife crisis.”

In 2005, after saving up money from her odd jobs, she took off for what was supposed to be a three-month trip to Europe. But she managed to extend it to two years thanks in large part to a stint writing travel-related newsletters for St. Christopher’s Inn hostel in London in exchange for free accommodation.

Eventually, however, the money and streak of good luck ran out and she returned to the US, settling in Los Angeles, where she worked alternately at Flavorpill, an ad company and part-time at Eater Los Angeles, where her interest in writing about booze and liquor took shape.

From then on she would fall in and out of love with freelancing throughout different phases of her life. There would be periods of severe burnout from unanswered pitches and constantly having to chase publications down for payment. On and off travel would become her antidote.

In 2013, she moved back home to St. Louis to live with her parents. After a year of saving money, she flew off to Europe again to live in different cities for months at a time, including a surf town in Ireland where she volunteered at a surf lodge.

“The thing about me is I like learning new skills, otherwise I get bored. I volunteer to meet new people, find new stories, and take new paths that I wouldn’t have taken otherwise.”

Her big break and the importance of Twitter (she says reluctantly)

Evans has a love hate relationship with Twitter (follow her at @yolie007). But she reluctantly acknowledges that she found her big break writing for Travel and Leisure via the micro-blogging site when one of the editors put out a call for a Writer of Color (WOC) in 2015.

“I hate Twitter but I realized it’s become necessary in journalism,” she said. “But unlike others, I’m not using it to build a personal brand. I don’t want to be there all day. I’m using it to find jobs and write.”

Evans also credits Twitter for helping her land her favorite piece on Irish moonshine which she had been pitching for three years.

For the first year, it was crickets. In the second year, she changed tactics and started to engage with editors on Twitter. That’s when the tide started to turn.

“It was my last-ditch effort. I had told myself I was going to retire the pitch. It’s my favorite story because it gave me a real high when it was finally published.”

The nomad lifestyle and moving to Berlin

Evans’ lifestyle choices may not be realistic for writers with families and other responsibilities that tie them down to their home country. And she acknowledges she lives what others could consider a frugal lifestyle. When living in Ireland, for instance, she shared a house with five other people so that she paid $200 in rent a month.

She worked and lived in hostels while traveling, often exchanging work for free lodging. She also lived on a strict budget, cooking for herself and splurging only occasionally on a cocktail.

Today, she’s in Berlin, about to apply for a three-year freelance or artist’s visa, perhaps one of the easier ways for non-EU nationals to live in Europe as there is no age limit.

In order to provide proof of a steady income, she has joined the Forbes contributor network, which guarantees $500 USD a month for seven articles. Though many writers are split on the volume of work versus the nominal pay, Evans weighed her options and decided the brand recognition of being a Forbes writer, exposure and minimum $500 guarantee make the job worthwhile.

“The dream goal is for people to come to me with assignments. And even if I don’t land any assignments that month, I’m guaranteed $500 a month. This could also be a place for stuff I can’t land anywhere else.”

On being a Writer of Color

“I don’t write about being black. I don’t want to sell that,” she said.

“I know a lot of people write about the black experience, but then you get typecast.”

Though she’s open to writing about the experiences of other POCs, Evans said she doesn’t write personal essays and prefers to concentrate on the travel and booze beats.

Nor is she a fan of putting it all out there.

“It’s exhausting to put out your experiences like that.”

And while she conceded that the industry is making a few strides in giving WOC a voice and giving more editorial roles to people of color, she sees another disappointing trend in her beats.

“In the food and travel world, I see editors commissioning the same writers of color.”

Evans was able to drop the side hustles to supplement her income in 2017 and has been a full-time freelancer ever since. She credits age, confidence and renewed creativity for the transition. She estimates she sends between 15-20 pitches a month and that four to five land a home.

Given the choice between a staff job and the life of a digital nomad journalist, Evans says there’s no contest, both for personal and prosaic reasons.

“I like my freedom. And these days, with media layoffs, who wants a staff job? You’re hired, then fired six months later, so that they can hire cheaper freelancers. That’s not for me,” she said.

“I’m never going to have a lot of money but I’ve had a lot of adventures. The one thing I see when I meet freelancers is that they’re always working. I’ve done a lot of things in my life. I’ve gone mountain climbing, surfing, I lived in Prague, Morocco, London, all over Ireland…I’m trying to live the best life I’ve got.”

Latest Posts from Our Writers: