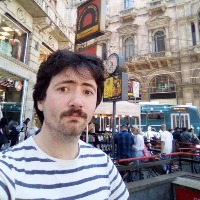 Eoghan Lyng is the author of "U2: Every Album, Every Song." He is currently working on a follow up book, and would like to show you a selection of his rock interviews:

In the Studio With George Harrison

the_title();?> Eoghan Lyng interviews Keith Fulton and Louis Pepe, the two documentarists who registered Terry Gilliam's very personal and Quixotic quest during the completion of The Man Who Killed Don Quixote Chronicling American-born British filmmaker Terry Gilliam's 30-year crusade to make The Man Who Killed Don Quixote (2018), directors Keith Fulton and Louis Pepe demonstrate a director every bit as infallible as the character that captured his creative muse for so long.

Far Out Meets: Imelda May, from Ireland with love

In what starts off like a scene from Ballykissangel, a man and a woman meet to discuss their visions of an Ireland untroubled by past, promise or papacy. The only difference is, there's no hunky priest to mediate the conversation, and I doubt Imelda May is especially interested in discussing the secular within her spiritual oeuvre.

Exploding in the 1980s, Andrew Roachford's 'Cuddly Toy' rocketed from the CBS Recording Studios to the upper echelon of the fiery Billboard Hot 100. With its pounding hook, jaunty chorus and colossal vocal sound, the song still remains a rock radio mainstay, accruing fans as diverse as the louche Alan Partridge to the dynamic Beverley Knight.

Canadian born actress Cobie Smulders is a fixture through television and cinematic mediums. For followers of the small screen, Smulders is known for her stellar work in the multi serialised How I Met Your Mother, for Marvel fans, she will be forever remembered as Shield operative Maria Hill, circumnavigating The Avengers (2012).

A Curious Feeling: Tony Banks Talks " We Are Cult

❉ Genesis' keyboard wizard discusses his solo work. Genesis. You loved them or hated them. Give the scope, selection, size and sonics of their work, it was even easy for their most hardened fanbases to assign such devotion/derision to Foxtrot, Duke and We Can't Dance.

Sophia Lillis’ newest project is the Alan Ball (Six Feet Under) film, Uncle Frank, in which she stars with Paul Bettany. This edgy film is set in the 1970s and was a big hit earlier this year at Sundance. It will be released on Nov. 25th via Amazon Studios.

A Groovy Kind of Interview with Eric Stewart

Eric Stewart discusses many of the varying parts of his musical trajectory, including writing with Lol Creme and Paul McCartney

By 2008, Oasis, a group that used every hackneyed Beatle reference outside of Revolution 9, had broken up a decade too late. How very different in 1994 with the onset of Definitely Maybe, a powerful punching record steeped in the very best of rock n'roll, a format continued on two exhilarating follow-ups.

Franc Roddam the Director of The British Classic Film : Quadrophenia talks to Eoghan Lyng for...

On its 40th Anniversary, Eoghan Lyng talks to the films director, Franc Roddam​ Quadropohenia the film that put a 'Q' into Classic British film titles will be 40 years old in a few months. Everything that needs to be said about the film has probably already been said. Until now!