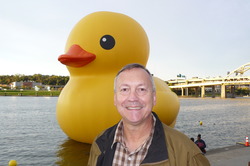 “There is probably no hell for authors in the next world —they suffer so much from critics and publishers in this.“ —C.N. Bovee

Zachary (Zack) Hubbard is an accomplished writer experienced in a wide variety of media including news writing, editorials, books, marketing collateral, social media content and technical documentation. He is currently a Senior Technical Writer and Business Development Analyst for Peregrine Technical Solutions, LLC. Zachary was an Editorial and Technical Advisor for the Journal of Information Warfare for four years. He was also an opinion columnist for the Tribune-Democrat newspaper (circulation ~45,000) for over 10 years. On the fun side, Zachary was a regional correspondent for the Brewing News for over four years, writing for the Mid-Atlantic edition (circulation ~50,000).

Zachary worked over a decade in the Information Technology (IT) services sector as a Division Manager leading software development and as a Strategic Marketing & Sales Analyst in the Fortune 100, where he wrote extensively on technical national security topics including computer network defense, information warfare and strategic communication.

In his former career, Zachary was a lieutenant colonel in the U.S. Army. His 26-year career included service in a variety of challenging command and staff positions in the continental United States, Western Europe, the Balkans, Africa and the Middle East. Commissioned a second lieutenant in 1977, his career specialties were Field Artillery and Intelligence. It was as an intelligence officer that Zachary honed his research and writing skills.

He is a former department head and Master Faculty Member of the Armed Forces Staff College, a campus of the National Defense University. While there he lectured on a wide range of communication topics, including Information Operations and Information Warfare.

A couple of years ago I wrote an article for my newspaper column with some advice for recent grads. It has become one of the most popular pieces I ever wrote. I received dozens of emails thanking me for writing it. Therefore, I decided to republish it annually around graduation time.

"If you decide to just go with the flow, you'll end up where the flow goes, which is usually downhill, often leading to a big pile of sludge and a life of unhappiness. You'll end up doing what everyone else is doing." - Sean Covey, "The 7 Habits of Highly Effective Teens."

Zachary has been an opinion columnist for the Tribune-Democrat newspaper for over eight years. A former senior intelligence analyst in the U.S. Army, the focus of his column is mainly on national defense and national security topics, with an occasional detour into local and state politics.

Deregulation of the electric power industry worries almost everyone. Higher energy costs give good reason for concern. However, there is something even more worrisome about this industry that few citizens consider. Security vulnerabilities in the national electric power infrastructure threaten all Americans.

All eyes are on Capitol Hill, where Congress is keeping the public's attention sidetracked by defending corporate bailouts and sniveling about executive bonuses at AIG. Meanwhile, China has been quietly maneuvering to secure its position as the world's leading superpower.

This white paper on advanced oil filtration technology was written for a consulting client in Pittsburgh, Pa.

Operations in the Information Age: a U.S. Air Force Perspective - by Zachary Hubbard

“There is a war out there, old friend - a World War. And it’s not about who’s got the most bullets; it’s about who controls the information. What we see and hear, how we work, what we think. It’s all about the information.” --Cosmo from the Universal Studio’s movie “Sneakers”™

A Multi-agent Cybercraft Society for Describing the Information Environment

Used with permission. This concept paper was written for Honeywell as a response to a government request for information. Sections of the document have been redacted to remove proprietary information.

A paper co-authored with Dr. J. Kendree Williams for presentation at the 2003 Enabling Technologies for Simulation Science Conference in Orlando, FL

With a strong Euro and a declining U.S. dollar, trips to Europe can be particularly damaging to the wallet. Fortunately, for beer tourists within reach of Pittsburgh there’s an alternative to a costly beer tasting trip abroad. After months of anxious anticipation, the Hofbräuhaus Pittsburgh celebrated its grand opening on April 29th. As the name suggests, this newest Hofbräuhaus is an American cousin of what may be the world’s most famous brewery, the Hofbräuhaus Munich, official...

Unwinding in Windber With a Touch of Elegance

Just a few miles from the Flight 93 Memorial in Shanksville, Pa. stands the small coal-mining town of Windber. Windber was created literally overnight in 1897 by the Berwind-White Coal Company. Much of the beautiful town, which lies in the southern Allegheny Mountains, has been restored to its original, late nineteenth-century glory, including the historic Arcadia Theater and the building housing the Windber Coal Heritage Museum. The latest addition to Windber’s architectural restorations is...

On a Soldier's Burial at Arlington National Cemetery

This poem was written shortly after the burial of Zachary's stepfather Ray, a career U.S. Army officer, at Arlington National Cemetery.

A thesis presented to the Faculty of the U.S. Army Command and General Staff College in partial fulfillment of the requirements for the degree of Master of Military Art and Science.