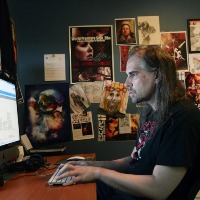 Writer and editor of games, comics, and other such things.

During my 30-year run as a writer and editor, I tried a bit of everything before finally finding my home in the glorious madness of narrative design.

I've paid the bills as a comedy writer (stand-up, sketch, radio) and newspaper editor. I wrote a comic-book series endorsed by Clive Barker and edited many others, including dozens of books for Scout Comics' Black Caravan imprint. I wrote/directed the horror movie The Wrong House and played monsters in several other films. For Epic Tavern, I created hundreds of quests, 160 unique hero backstories, and did extensive world-building. For Murder on the Midway (which I also code), I designed dialogue trees and created a fully-functioning traveling carnival loaded with dozens of memorable characters.

I thrive on complexity, I have a quiet, dedicated home office deep in the Maine wilderness and impeccable references as a remote writer. It is my firm belief that having worked in damn-near every storytelling medium known to humankind has prepared me to handle anything a project throws at me.

Some recent projects are the werewolf audio series Blood Forest and the standalone audio ghost story Return to Blackout Point, both available by searching for UNDERTOW wherever you get your podcasts.

Some Stuff I Wrote

UNDERTOW is an ongoing supernatural horror series that reveals the dark, monstrous side within us all. Every week, host and creator Fred Greenhalgh will take you deeper into this warped version of Maine where nothing is as it seems. Here, still waters hide eerie rip-currents and the secrets we keep...

Official Selection: PAX 10 2019 Winner, Momocon 2018 Indie Games Awards "A fascinating reverse-RPG" - PC Gamer "A cross between The Sims and a rousing game of Dungeons and Dragons"- Geek & Sundry One of "The Best New Steam Games You Might Have Missed This Week"- Rock, Paper, Shotgun Epic Tavern is a fantasy-management-RPG where you rule the land from your Tavern.

Illustrated by Mortimer Glum and written by Shawn French.

An attempt to clone Jesus eventually succeeds, but in the process creates scores of hideously deformed near-Jesus freaks and a monstrous twin brother, Yeshua. When the Vatican learns of Christ's return and sends in an extraction team, all Hell breaks loose in this horror comic book series from writer Shawn French and illustrator Mortimer Glum.

An indie horror flick I wrote/directed/edited.

A webcomic spinoff of Escape from Jesus Island, featuring the Antichrist and his mutant pals as adorably murderous toddlers. Created as a proof of concept for an animated series pitch.

Murder On The Midway

Tales: Choose Your Own Story A series of grisly murders rocks the Eternal Circus, a 1970s traveling carnival. Solve the mystery and uncover the Sideshow Slasher... or become the next victim.

Gears and Mutants is a tabletop skirmish game set in a dark and twisted version of the American Civil War. Designed by Nicolas Genovese, rulebook by Shawn French.

Murder on the Midway interview

An NBC interview about my series for the Tales app, Murder on the Midway. www.murderonthemidway.com

LIMERICK - From the time he was in middle school, fiddling around with his Commodore 64 computer, Shawn French dreamed of a career creating video games. He left Maine a couple times in his 20s to pursue video game jobs that never materialized.

Epic Tavern was selected by Penny Arcade as one of their 10 favorite indie games of 2019 and exhibited at PAX West.

My appearance as a guest professor on the comedy gameshow Balderdash Academy.

The pandemic is pushing many Mainers into new lines of work

A 2021 interview about staying afloat as a creative professional during a pandemic.

It's happened to anyone with an interest in the medium; standing in line or sitting in traffic, an idea snakes its way into your head and you think, 'This would make a great comic book!'

The first two episodes of a comic-book series I wrote and co-created with artist Mortimer Glum.

A webcomic spinoff of Escape from Jesus Island, featuring the Antichrist and his mutant pals as adorably murderous toddlers. Created as a proof of concept for an animated series pitch.

Some Things I Edited

The Electric Black is a cursed antique shop, appearing in any time or space, soliciting customers it hungers to corrupt or devour. The mysterious Julius Black is the store's demonic proprietor and narrator. He and his psychopathic employees regularly manipulate patrons for their own devious purposes.

The One Stop Shop Comics & Games

Seventy-two children are conscripted to the Academy of Black Magic for a duration of seven years in an environment devoid of the sun. At the end of their seven years of study eight will survive - but only seven will walk out... Homage cover to "Battle Royale"'s movie poster!

Black Caravan imprint. For uncounted millennia, the Cryptocrystalline Stone remained lost to the blackness of space, hidden amongst the stars. As time passed, the galaxy slipped into greater peril. Thousands of systems fell and worlds crumbled. Dark and ominous beings conspire from the shadows to possess its unlimited power and ability to resurrect a legion of deathless warriors.

In the early Viking Age, a faithless Norseman Detective is summoned to a Scandinavian hamlet where a series of familicide murders have occurred. Discovering the dark and bloody history of the village he investigates the local outcast, a Necromantic Witch who brings his atheistic values into question.

Scout Comics & Entertainment develops, publishes and launches creator-owned comics. By consistently bringing exciting new, talented voices and their Intellectual Property to market, we have established ourselves as a pipeline to major studios and producers for some the of best new characters, ripe for development.

Black Caravan Imprint: Tales Told In Techni-Horror is a biennial horror series that blends the best in horror sub genres (body shock to grindhouse and more). Each issue contains five short stories from the dark minds that brought you Provenance of Madness. Includes a mini pinup gallery of horrors.

In the lands of High Adventure, where brave warriors seek out fame and fortune, the unlucky few will recruit a Murder Hobo into their ranks. Follow the further exploits of Roddy the Rotten, Big Momma Venus, and Spectra Liaison as they team up with (and ruin the plans of) every adventurer they come across.

Black Caravan Imprint: Alison Hart wakes up inside a bright candy-colored room to discover that she's tied down with licorice, small toys around her move because they're alive, and her hands are no longer real. She struggles to piece together the surreal and horrific events that led her to this place and more importantly what has happened to her young daughter, Emma.

Black Caravan Imprint. Rockstar Cherry Blackbird sold her soul for fame. Now at the age of 26, time is running short. The day she turns 27, she'll be dragged to Hell. But Cherry is not one to go quietly. The Devil tasks her with collecting seven demonic souls that have escaped the Abyss.

A Little Prince in the Land of Mullahs

The true story of a teenager who stood up to the mullahs' regime in Iran, recalled in the words of his surviving sister and told through drawn pictures. Ahmad, the hero of this story, was killed in 1988 at the age of 24, while in captivity but the perpetrators of the murder remain in key positions of power in Iran.

From the chilling pages of the Electric Black comes a new horror anthology, centered on its most insidious characters. Brace your souls for four twisted tales of murder and mayhem. Featuring the art of: Paul Pelletier, Karl Moline, Christian DiBari, Walter Ostlie. Kickstarter-exclusive covers by: Ben Bishop and C.P. Wilson III.

Black Caravan Imprint! Black Friday is the biggest shopping day of the year. Millions of Americans pack the aisles of retail outlets all over the country battling for the best bargains. What could go wrong?

The One Stop Shop Comics & Games

Black Caravan Imprint: The Curse of the Cryptocrystalline Stone continues in 2021! Follow the Cosmic Ghoul Warrior and young psychic, Acele Aerglo, as they embark on the next chapter of an adventure that will take them from the vastness of The Void to the depths of an aquatic moon crawling with fantastic creatures!

Delightful telling of seminal ghost stories that have inspired many favorite tales. This hard bound book was a Kickstarter project that I backed. The illustrations are gorgeous and the printed book is excellent quality. I will not hesitate to back another project from manoghosts.com.

Cherry Blackbird made a deal with the Devil for fame. The day she turns 27, she'll be dragged to Hell. But she's not one to go quietly.

Deep Inertia is an decision based narrative game with linear progression but with an open like feel. It's completely hand drawn and textured and will be multiplatform. You play as John Renton, an antagonised and tortured scientist working for the President of the United States.

Dylan Andrews is raising funds for THE OPPRESSORS on Kickstarter! A retired vigilante has 24 hours to prove that he's still got what it takes to save his family, and himself.

ARCHIVE The WarHood Odyssey Volume One

An unwilling and unlikely hero is forced to use a futuristic weapon against its creator to save a dying planet. 129 backers pledged $4,575 to help bring this project to life. You'll need an HTML5 capable browser to see this content. ARCHIVE The WarHood Odyssey Volume One - (31 days)

An ancient, hungry creature from the deep has risen to the surface to wreak havoc on a violent world. 73 backers pledged $2,516 to help bring this project to life. You'll need an HTML5 capable browser to see this content. - (25 days)