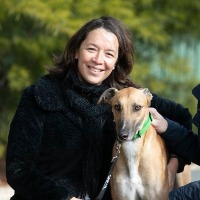 Venita is a Melbourne-based writer, editor and doctor. She has a lifelong love of music & travel, loves greyhounds & coffee, and would love to publish a novel or two.

For the last year it's been like a nuclear winter for the live music scene in Melbourne. Fourteen months to be specific. The last live gig I saw in Melbourne (apart from buskers in Bourke St) was Julia Jacklin at Melbourne Zoo back in February 2020. That was just before Covid Lockdown 1.0 happened.

This week we talk to Venita Munir about 'Time To Leave' which appears in Time, the latest Microlit anthology edited by Cassandra Atherton and published in 2018 by Spineless Wonders. In this interview, Venita talks about her approach to writing microlit, what she is reading right now and her favourite time of year for putting pen to paper.

There is no girl

After the rain eases in the humid dawn, Ezrin lies on his bed and listens to the jungle wake to the hill-myna's song. The bird's shrill whistle echoes across the valley

I glimpse him from a distance, a Drizaboned mirage on the road. He tips his flask upside-down and his shoulders drop.

Overhead A cloudless blue ceiling Beneath Buoyed by liquid hands

Randall Thomson peruses his ageing face in a shard of mirror tied to a picture hook. Flotsam from the beach, the shard at least reminds him to shave.

I walked home from the public swimming pool, having swum my mandatory forty laps. Thinking-time in the pool helped wash away my nights on call, if only to refresh me for the next.

I can probably help

A yellow rescue helicopter hovers menacingly just beyond the break. Its downdraft carves a white-fringed crater on the sea's surface.

I'm on my knees in the wet sand, leaning over a woman younger than me. She's clothed in jeans and a t-shirt, which has been pulled down to expose her chest. She is cold and grey. Her eyes stare, pu...

From the Flashing the Square 2015 project, Out of Place, produced in collaboration with Spineless Wonders, Sydney Conservatorium of Music and the many fantastic writers, musicians and voice actors who have contributed to the project.

Evie lies on her back. The noise-cancelling headphones squeeze her skull. Her surging thoughts press from the inside.

This essay carries a warning that some of the content may distress some readers. It contains references to animal cruelty and descriptions of such.

Let's get it over and done with - 2020 hasn't been a great year. Thank goodness for all the musicians of the world who've kept making music throughout this unspeakable pandemic. As most couldn't travel and haven't been allowed to play live, at least technology has enabled digital recording and sharing, and live streaming performances.

It's a cool Friday night, the penultimate day of summer, out on the lawn at Melbourne Zoo. As usual for Zoo Twilights, it's packed with folk of all ages, relaxing with a beer or a pink gin with mates and family, waiting to hear some great [...]

It's been a busy week for live music all over Australia. There were so many tantalising acts, both local and international, I had to rationalise and choose how many gigs I could attend (unfair). By the time tickets went on sale for Neko Case at the Melbourne Recital Centre, I almost couldn't justify the number of nights out in one week.

Another month of Zoo Twilights concerts is almost a wrap, with Marlon Williams, supported by Laura Jean, as the penultimate show. Laura Jean and her band arrive on the stage at dusk. I'm not familiar with her music, and she takes a couple of songs to warm up, but her laid-back banter, beautiful voice and 80s-style saxophone are pretty likeable.

I love a road trip. If I didn't have to work, I'd probably buy a VW Kombi van or a convertible Mustang and take off with little more than a fridge, my music and my dog. At risk of being chastised by the family, I'll qualify this by saying there is something deeply personal and indulgent about a road trip.

They wanted to make a pop record for fun, and yep, that's what they've done. Phantastic Ferniture's self-titled debut album gets the tick for 'pop' and 'fun', but not in that sickly boy-band/girl-band formulaic kind of way. It's much more cool.

And so it transpires, this weekend is the opening of Sydney's Vivid Live 2018 festival, in its 10th year. I've made the trip up from Melbourne to see Sam Beam and his full band, Iron & Wine, play at the Sydney Opera House having never set foot inside the building.

The San Sebastian - Alive on the Black Sea (Spunk)

The San Sebastian's debut album, Alive on the Black Sea, is an intriguing debut for Adelaide brothers, Dan and Joel Crannitch. If you were a fan of Sydney's 78 SAAB in the early 2000s, or love other alt-country rock bands such as The Decemberists or Band of Horses, you might care to have a listen to these guys.

Venita talks to Black Rebel Motorcycle Club drummer, Leah Shapiro, about creating the new album, Wrong Creatures, and the band's hopes for some warm weather during their upcoming Australian tour.

BRMC largely fly under the radar here in Australia. Perhaps it's because they inhabit that alternative rock 'n' roll space reserved for bands the ilk of The Jesus & Mary Chain or Nick Cave & the Bad Seeds.

I've been fortunate to listen to Marlon Williams's much anticipated new album, Make Way For Love, for a couple of months now and finally it has made its public arrival. Fans will already be familiar with a lot of these new songs from his recent gigs or from having seen a few videos on Youtube.

Calexico - The Thread That Keeps Us (Spunk)

Yeah, so I'm a self-confessed Calexico groupie. Have been since first seeing them support Nick Cave & the Bad Seeds at Melbourne's Sidney Myer Music Bowl in 2003, touring their much revered album, Feast of Wire (2003). My mate Ross burnt Hot Rail (2000) for me soon after and I became hooked to their unique sound.

The other day I read a feature article about one of my all time favourite bands, The Jam - their individual style and musicianship, their rapid rise and premature break up, the precocious genius of frontman, Paul Weller, and the enduring love their fans still hold 40 years later.

Here in Australia we love to claim New Zealanders, especially musicians, as our own. It's pretty safe to say that we'd kill to brag about Marlon Williams being an Aussie. I mean, he was based in Melbourne for a while. Let's face it, he's a prodigy.

Although it's almost five years since Sigur Rós last played in Melbourne, memories of the second 'Harvest' festival remain strong.

The first thing that springs to mind listening to Naïm Amor and John Convertino's new instrumental album, The Western Suite and Siesta Songs, is the 1984 movie, Paris, Texas and Ry Cooder's atmospheric soundtrack.

Damage and Joy - The Jesus and Mary Chain (ADA/Warner)

It's been a long wait - 18 years since their last offering - and fans of The Jesus and Mary Chain, like myself, have surely been hanging out for the band's ninth studio album, Damage and Joy. The enduring brothers-Reid from Glasgow are back with 14 tracks of quintessential J&MC grungey guitar pop.

This new release from New Mexico, the self-professed "land of enchantment", is sure to get you dancing. Acoustic trio, Lone Piñon's second album, (literally translated Happy Days), is a fiesta of music that pays homage to the borderland's cultural roots.

Storm clouds threaten but never come close to snuffing out the enthusiasm of the crowd at Melbourne Zoo for what is the ultimate gig in this year's Zoo Twilights series.

Ode to the Southwest

Every story of landscape needs a soundtrack, whether it's filling a cinema with atmosphere, or just in the mind of the writer. Music that carries a sense of place,

It's been over a decade since I last saw legendary punk outfit The Stranglers play, so it's with keen interest that I rock up at Melbourne's Corner Hotel to see them in their most recent incarnation.

Conjuring a Sense of Place

Firm Melbourne favourites, Calexico, have toured Australia four times over the last twelve years and this year they bring a seven-piece outfit from Tucson, Arizona to promote their eighth album, 2015's Edge of the Sun.

CLINICIANS in every branch of medicine often need to access current, evidence-based, peer-reviewed resources to support their decision making and practice. Medical staff are increasingly reliant on digital resources (and I don't mean Dr Google), especially in hospitals.

MABEL: doctors shouldn't work in excess of 50 hours per week

"The impact of long hours, shift work and stress are known to affect mood, mental health and emotional wellbeing."

GENERAL practitioners' decisions to work in rural areas are significantly influenced by the educational stages of their children...

NOWHERE is the cliché "practise what you preach" more pertinent than in the medical profession.

Imagine, if you can, you are an Aboriginal person living in a remote community in Central Australia. You live with extended family, communing around the campfire sharing stories and songlines.