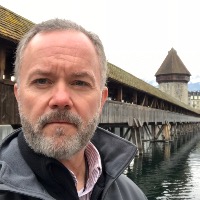 Across 21 years, Tony served his country in the United States Army as a career military intelligence officer, retiring from Joint Forces Command / Special Operations Command as a lieutenant colonel. From commissioning to retirement, Tony served in a wide variety of staff and leadership positions globally, including combat operations in Iraq. Among his overseas assignments and deployments are Germany, South Korea, Japan, Thailand, Egypt, Croatia, Spain, Qatar, Kuwait, Jordan, Bangladesh, and many others.

Tony is the author of numerous articles and blog posts as well as the book, God Loves You: Some Restrictions May Apply (and Many Other Christian Dilemmas) (2019). He is available for freelance writing and editing, with a special affinity for science, travel, politics, and theological topics.

Tony holds a bachelor’s degree in political science and two master’s degrees: in international relations from Troy University and professional writing from New York University. He is a graduate of both the US Army Command and General Staff College and the Joint Forces Staff College. His hobbies include SCUBA diving, paragliding, classical guitar, and a passion for traveling (fifty-one countries and forty-five states so far and counting).

Tony Davis - God Loves You: Some Restrictions May Apply (And Many Other Christian Dilemmas)

God Loves You: Some Restrictions May Apply (and Many Other Christian Dilemmas) is written by a fairly well-educated, extensively travelled former Southern Baptist Bible Banger (SB3), professional layman, retired military intelligence officer, and keen observer of the human condition who happens to be fascinated with what we believe, why, and the effects of those beliefs on society. This is an appeal to honesty in the terms of epistemological disquisition, a critical analysis of the major...

Despite another Trump-Kim meeting, by the numbers, America's choices don't appear promising. A new OP-ED by Tony Davis.

Would you equivocate with this?I talk to Tony Davis about the intellectual honesty.Chat us up in the comments or email us.Tony Davis Rich Sandermoralmisfits2...

Tony Davis - I Believe There is Wonder in the Universe

At the time of this writing, I have now been to 51 countries and 45 states in the U.S. To some, that is not a huge number, but to most, I suspect it is quite a bit of travel. As I believe travel...

Petra - A Drive By of the Rose City

Petra, sometimes called the Rose City owing to the fantastic structures carved from the pink sandstone hills in the area, is located in southern Jordan. By the way, Petra is derived from the Greek word for “rock,” so the name is fitting. The area around Petra was inhabited as early as about 9,000 years ago. It became the capital of the Nabatean civilization around 200 BCE. The Nabateans were largely nomadic Arabs who took great advantage of Petra’s location to establish a major trading hub.

Cambodia - A Temporal Drive-by of the Khmer Empire

Properly done, travel can be more than simply moving about physical locations, it can be a form of time travel. Seeing ancient sites gives me a feeling of connection to our shared history and humanity. The sites around Siep Reap, Cambodia is rich with such possiblities.

Where in the World Was My 51st Country?

Helen Keller said, "Life is either a daring adventure or nothing at all." I could not agree more. Life truly should be lived on purpose. Don't just be a passive observer. Go out and aggressively engage with the world around you.

Socrates, Plato, and Aristotle Walk Into a Bar... An amazing first experience in Athens, Greece

I don't think I know of anyone who does not have Greece on their bucket list of places to visit. I've long wanted to see it in person. Part of my "excuse" for visiting Greece was that there is a...

A Drive-by of Madrid

It had been a hectic few months, replete with demands of work and school. I wanted to take advantage of Spring Break and the relative lull before the rush of completing the Spring semester and all that awaited at my day job. But where to go?

A Short, But Full, Trip to Belize

Belize has been on the bucket list for quite some time. The initial infatuation with this small Central American country mostly revolved around SCUBA diving in the Great Blue Hole. As it turns out, the Great Blue Hole will have to wait for the next visit, but there was so much more to do and see, and a number of surprises along the way!

Iceland - The Land of Fire and Ice

Something I like to do when traveling is to play a game with family and friends on social media where I drop obscure clues about wherever I happen to be and the first person to guess where I am wins...

Where in the World Travel Game: I often travel without telling anyone (other than a trusted agent) where I am going. Clues are dropped along the way on social media, and the first person to correctly guess the location wins a small gift card.

Living With Yoda (the Cat)

"On the other hand, a cat's love is like that of an aging, jaded, crack-addicted prostitute. It's there for you when the cat needs it. It's there with conditions. It's there when there's something in it for the cat." These past couple of months have been something I would not have predicted even two months earlier.

We should not be distracted by the COVID-19 survival rate

I have seen many social media posts in the past few days focusing on the survival rate among those infected with the novel coronavirus or COVID-19. These posts and even some media reports appeal to an emphasis on the fact that most of the people infected with the coronavirus survive rather than the number of deaths.

An Atheist's Morning Rant About (Some) Atheists

A few years back, I saw an interesting talk by astronomer Phil Plait about not being a dick when dealing with people of differing opinions. This talk resonated with me for several reasons. First, I have always preferred to treat everyone with a basic level of respect and dignity, at least until they prove utterly unworthy of it.

Cognitive Dissonance: The True Nature of The Good Book

NOTE: This blog is one in a series of companion pieces to my book God Loves You: Some Restrictions May Apply (And Many Other Christian Dilemmas) . References to chapters and other topics of discussions are to that book.

An Atheist's Defense of Bible Reading - Despite its Myriad Flaws

NOTE: This blog is one in a series of companion pieces to my book God Loves You: Some Restrictions May Apply (And Many Other Christian Dilemmas) . References to chapters and other topics of discussions are to that book. When I think of all the harm [the Bible] has done, I despair of ever writing anything to equal it.

Is the Old Testament Trustworthy?

In this, the first of a series of articles that investigate the truth claims of the Bible, some of the extraordinary claims of the book of Genesis, are evaluated. Part two will address the reliability of the New Testament, and this will be followed by an investigation into the various other claims of truth and wisdom attributed to the Bible.

VA and the Department of Health and Human Services' Substance Abuse and Mental Health Services Administration (SAMHSA) convened the Mayor's and Governor's Challenge participants in July to discuss how safe messaging and social media best practices can help prevent suicide.

Congratulations to Community Veterans Engagement Board Co-Chair Joe Bello on his recent induction to the New York State Senate Veterans Hall of Fame. Joe's commitment to New York's Veterans, their families, caregivers, and providers embodies the selfless service that is a hallmark of the profession of arms.

Virtual Veterans Experience Action Centers, or V-VEACs, continue to improve outcomes for Veterans, family members, caregivers and survivors across the nation. The program was established to proactively assist Veterans in a selected state with a one-stop resource for all their needs.