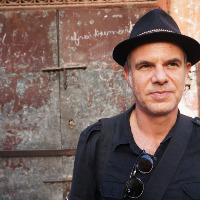 Tom Vater is a writer and editor working mostly in Asia.

He has published six crime novels and was co-owner of Crime Wave Press, a Hong Kong based crime fiction imprint which published 36 novels between 2012 and 2021. In 2022, he sold the film rights to his debut novel, The Devil's Road to Kathmandu, to 108 Media.

Tom has written some twenty non-fiction books, including the bestsellers Sacred Skin with Aroon Thaewchatturat, and Cambodia: A Journey through the Land of the Khmer with Kraig Lieb.

Tom's work has appeared in The Wall Street Journal, The Economist, The Times, The Guardian, Nikkei Asia, CNN, Marie Claire, Geographical, Eco-Business, The Mekong Review and many others. He is the Thailand Daily Telegraph destination expert and has authored several guidebooks on Thailand and Cambodia.

He is the co-author of three documentary screenplays, including the highly praised The Most Secret Place On Earth, a feature on the CIA’s secret war in Laos.

TOM VATER, Contributing writer In two months' time, China will attack Taiwan. China's president has decided on reunification by force. More than 150,000 troops are expected to die in the initial assault. The quality of life for the survivors will deteriorate. China's economy will stall. The global financial system will be shaken.

The conflict in Ukraine and Thailand's cost of living crisis

The country's most vulnerable are stuck between a rock and a hard place. "The driving was fine during the COVID pandemic. The roads were empty, the gasoline was cheap and there was a lot of work." Kate has been a Lalamove driver in Bangkok for the past two years.

A Thai pop star uses her music to critique her homeland

T he video is captioned "UGLY TRUTH ABOUT THAILAND". Peeralada Sukawat-better known by her stage name, Pyra-looks into the camera and rolls her eyes. "Bangkok babies in Mercedes," she raps over looping drums and a synth beat. "Rich gets richer, poor gets poorer,/Inequality's a bitch, this place is gettin' shittier."

Over the past 30 years, more than 50 per cent of reefs have disappeared and more than 75 per cent are damaged. Another 40 per cet of the remaining coral may disappear in the next 30 years, unless there is a global conservation rethink.

A museum tells the history of one of Bangkok's notorious districts

As The Serpent draws to a close, one writer recalls interviewing the serial killer in prison - and his shocking lack of remorse In December 2003, Central Jail in the Nepali capital Kathmandu was everything one might expect from a prison in a developing country.

Meet Clara Green, Emerald, Chartreuse, Olive, Hunter, Juniper and Forest. They are The Green Panthers: a privately sponsored, multi-national underground army, on a mission to hold corporate polluters to account. During the attempted rescue of a snow leopard hunted by British tycoons in Siberia, t...

Detective Maier and his Russian sidekick Mikhail solve heinous crimes in Southeast Asia's underbelly in The Cambodian Book of the Dead, The Man with the Golden Mind and The Monsoon Ghost Image.

The Devil's Road To Kathmandu

In 1976, four friends - Dan, Fred, Tim and Thierry - are on a bus along the hippie trail from London to Kathmandu. But everything is not going according to plan. After a drug deal goes wrong, the boys barely escape with their lives. Thousands of kilometers, numerous acid trips, accidents, nightclubs and a pair of beautiful Siamese twins later, they finally reach the counter-culture capital of the world, Kathmandu, and Fred disappears with the drug money. A quarter-century later, mysterious...

Becker is a British traveler in trouble. Madhurima is a rising star police officer. In these three explosive tales, the two join forces to investigate the city’s crooked high society. On the way, they take on deluded would-be messiahs in search of Mother Teresa’s stolen millions, encounter fanatics, circus freaks and cannibals, fall in and out of love and pay homage to one of the world’s most beautiful and toughest cities. Amidst passion, murder and mayhem, is there room for two lovers...

With Siem Reap & Phnom Penh The ancient temples at Angkor Wat are unlike anything else on earth. Step back in time and take the trip of a lifetime with Moon Angkor Wat.

The CIA's secret war in Laos, as told by protagonists on both sides, including State Department officials and Hmong general Vang Pao.

In the footsteps of Alok Sharma, the top policeman in charge of the Maha Kumbh Mela in India, the largest gathering of people on planet earth, ever!