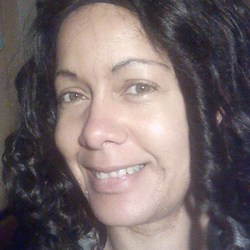 Greetings! I am a repped screenwriter with several completed screenplays, listed below. I am also working on a couple of projects, 2 of which are TV series (one limited) with partners/producers. Agnes, now untitled, is being produced this month and will probably be available on a streaming service by year's end. I have been into writing since I was a child - I used to dream of becoming a novelist. Unfortunately, I am not good with that - I am a better screenwriter. I started concentrating on scripts in 2017 after a brief hiatus (I wrote my first script in 2007), and have been on a roll since the pandemic began. My main genres are horror & thriller but I also write drama as well.

Blood Money: A band of criminals encounters a crew of ghost hunters in the woods, forcing them into a cruel game of torture - not realizing that they all are being duped by a murderous manipulator. (Reformatting the script)

Gypsy Gorge: Five college pals head for the mountains in anticipation of a relaxing weekend, only to find out that this is the dreaded anniversary of a rape-murder that led to a Gypsy curse: and they must learn how to end it or else.

Baxter County: Four friends visit an occult shop, witness a shocking double murder, and discover that they've become the puppets of a county full of sadistic freaks who have turned cannibalism into a business.

Island of The Lost: When people go missing off the coast of Australia near an island not found on any map, a team of investigators flies from America to find out why and get caught up in something horrifying that they can't easily break free of.

Nemesis: When the law refuses to help a rape victim to prosecute her attackers after a barbaric assault, she obtains justice on her own - using the powers of the occult.

Lightning Strikes: Three Romany sisters experience supernatural terror when one of them starts to see brutal killings take place - through the murderer's eyes, which they desperately try to stop using spells and chants that eventually help in an astonishing way.

Eris: An arachnid specialist brings home a new specimen, where the spider escapes to infect members of an upscale mountain community, which in turn brings the US Army in to deal with the situation by imposing quarantine and destruction.

Darkland Moors: Six young tourists in England - with the help of a native - venture out to the Forest of Declan in search of the truth behind several old legends, and get far more than what they bargained for.

Agnes: A family moves into a gorgeous log home, not knowing the property's history - until one of them becomes possessed by the spirits of a murdered girl and the man who killed her. Now they must exorcise the girl before she commits murder herself. (SOLD and revised/retitled, in production at this time)

The Devil's Own: While flipping a house, the investors and their hired help are plagued by a demonic force they have no idea how to get rid of, so they call in a paranormal team to defuse the frightening situation.

Sometimes They Die (a current rewrite): Filmmakers head into a remote area near the Tuckaseegee River to shoot a movie, where they are set upon by an entity that won't allow them to escape. How can they get away alive? (AVAILABLE IN LATE 2022)

Zion: Two couples - one headed for Utah, the other for Los Angeles - both become the targets of a deranged killer who believes they called the law on him for his murderous crimes, committed alone and with the help of his companions.

California Blues: Two psychopaths fresh from Patton kidnap for ransom the children of a woman psychiatrist whose testimony put one of them away for nearly eight years on an attempted murder charge.

Velvet Valley: A couple of vacationers in the Nevada mountains become the pawns - and many of them turn into victims - of a dangerous clan of outlaws, whom the local sheriff is hellbent on taking into custody - dead or alive.

Deadstone: The passengers of a bus, and a beloved country music duo, are taken hostage by a pair of armed thieves who have left behind them a string of robberies - and dead bodies. They wind up in Big Bend NP, where a final showdown takes place.

When Darkness Claimed The Land: A young woman and her sister travel to Los Angeles in search of fame and fortune, in the company of a man they don't realize is a cunning serial killer. By the time they discover his true nature, it is much too late.

Blood Cult: A fundamentalist church in the suburbs of Atlanta turns bloodthirsty after their well-respected, much-beloved pastor has a fateful vision: Reverend Mordecai wants all sinners eradicated, much to the horror of a member of his congregation.

The Ire: During the celebration of a hotel's successful renovation, guests begin to disappear - and upon discovery of a dead body, they realize a killer is in their midst, one who wants revenge for a past hurt during the hotel's former incarnation.

All That You Have: A mysterious woman becomes the personal assistant to an affluent couple in Malibu, and starts desiring everything that they own - with the deadly intention of taking it all for herself.

Deadly Retreat: The employees of a small tech company head to a dude ranch for the weekend, where they experience a series of incidents that leaves some of them dead.

Emmett Till: The true story of the brutal lynching of 14 yr old Emmett Louis Till in Mississippi, the trial of his accused killers, and the shocking verdict that helped to rush in the Civil Rights Movement.

Black Bill: A Los Angeles father who runs a church with ideology similar to that of the Black Israelites and who fights against police brutality, goes off the deep end when he discovers one of his children cavorting with the enemy.

The Color of Bruises: Upon his release from prison after attempted murder, a troubled soul discovers that his former lover - whom he badly abused - has married the very man he almost killed, and this makes him lose his mind...again.

Here is The Question: The story behind the ruination of Adolf Hitler's mistresses, his rise to power, and how his heir came to be hunted by two agents of the Mossad, who wish to keep the great-grandson of Hitler in Israel - for his own 'protection'.

The City Different: The slaying of a popular Catholic priest, a string of tourist murders, local politics, race relations, and a bit of romance between the DA and a woman detective, all played out against the beautiful backdrop of Santa Fe. (Partly based upon actual events. This one is also available as a TV Pilot.)

An Execution in Texas: The family of a black death row inmate - and the families of his white alleged victims - come to terms with the fact they might have witnessed the execution of an innocent man, who was prosecuted due to his race.

The Heidelberg Exchange: An American tourist and her friend, on holiday in Germany, get unwittingly tangled up with the Russian Mob and an African terror group and must run for their lives.

Dreden: An African American man has been blessed – or cursed – with inhuman strength, which he uses to exact punishment against those who kill in the name of hate while being chased by agents of the US government who are dead set on destroying the monster they have created.

Trisha's Place: A strong-willed woman realizes her dream of owning a coffee shop & bakery, despite her family's objections, only to be bamboozled by a reality tv star who's used to getting her own way.

As You Are Now: A young woman visits a family member's gravesite and is stalked by Death in the cemetery.

The Campsite: Something strange is in the air that rapidly turns people into flesh-eating zombies.

What She Wants: One dark rainy night, a man picks up a stranded young woman who seems more than a weird.

The Black Box Incident Abducted. Infected. Discarded. PREMISE Deep within an American Black Ops facility, terrifying experiments are being conducted on ordinary citizens and families. One person to witness this firsthand is able to smuggle out to WikiLeaks the audio and video feeds from experiments gone deadly.

One For The Road

Directed by Viktor Hernandez. With Viktor Hernandez, Robert L. Edwards, Jacqueline Dorry, Ligia Pressley. After a long night at the bar, a small town bartender and her long-time customer are convinced to help a pleading mother. They embark on a mission to help her two children.