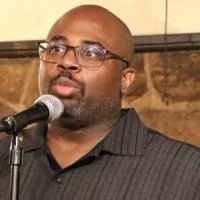 Mervyn R. Seivwright is from a Jamaican family and was born in Dulwich, a south suburb of London, England. His childhood started in Ipswich, Suffolk in England and at age 10 he moved to the United States. He later joined the United States Air Force for 22 years leading to traveling the globe. During this time Mervyn took part in performance poetry and wrote 7 self-published collections of poetry while in these other countries or on deployed service.

Highlights from performance poetry events included an opening for Def Jam's Comedian Bruce Bruce in Florida and Tommy Davison while deployed. He finished in the top 5 in the German American Institute Germany National Invitation Slam in Heidelberg Germany. He was a featured artist to the Paris Connection, an ethnic art collective that holds dinner functions in Paris France. He took first place at Cafe Kraaij & Balder Poetry Slam in Eindhoven Netherlands allowing him to finish in the top 4 at the Netherlands national level for Eindhoven. In England, he featured in Peterborough, Cambridge, and at Oxford’s Hammer and Tongue events. In London, he featured at the Bloomsbury Theatre, Brixton Arts Gallery, the Jazz Café, and placed 5th in England’s first National Poetry Slam.

Mervyn Seivwright's work has appeared or is forthcoming in The Santa Fe Literary Review, AGNI, The Trinity Review, Montana Mouthful Literary Magazine, iō Literary Journal, Toho Journal, and Rigorous Journal, as well as in Z Publishing's anthology 2019 Emerging Poets in Kentucky. His work has also been commissioned by the British Museum in Ipswich, England.

The American Journal of Poetry

Mervyn Seivwright's "The Weight He Carried," in Pushcart Prize 69th ranked journal in 2020, The American Journal of Poetry.

My Poem, “Can You Taste the Ivory Coast Chocolate?,” was chosen for 2nd Runner Up in Lucy Terry...

“This Morning I Walked Under a Wide Oak,” I-70 Review Literary Magazine

“This Morning I Walked Under a Wide Oak,” I-70 Review Literary Magazine, Print, Volume 14, Summer/Fall

Poem, “I Believe These Magpies Followed Me,” in Ligeia Magazine.

My poem in the top 100 of 2021 Perpetual Folly Literary Magazine Rankings of Poetry. Ligeia Magazine selecting my poem, “I Believe These Magpies Followed Me.”

I give thanks to Canisia Lubrin, the guest editor and the staff of filling Station 76 for selecting my Sestina poem, “Stick, Hook, and a Pile of Yarn.”

Volume 131 of the The Trinity Review published by University of Toronto, Toronto, Canada

Coming Home From the Cold

Driving in America passing palm trees, Florida's grassy green marshlands, counting mile-markers in the rear seat of a gray station wagon with my brother. He and I navigating a map longer than our arms, playing magnetic checkers and chess, reading, counting red cars and navigating again.

Issuu is a digital publishing platform that makes it simple to publish magazines, catalogs, newspapers, books, and more online. Easily share your publications and get them in front of Issuu's millions of monthly readers. My Poem "Dangling is on page 29.

"The Distance Away, Crumble"

"The Distance Away, Crumble" behind the closets shivers creaks the wind carries, neither sleeps. Note: A "CHU" is a Containerized Housing Unit-a form of expedient modular housing made from stacked shipping containers. Mervyn R. Seivwright is from a Jamaican family and was born in Dulwich, London, England.

"There are instants when photos are clicked"

Mervyn R. Seivwright was born in London, England, and is currently studying for an MFA in Poetry at Spalding University, Louisville, KY. You can find out more about Mervyn at: https://t.co/tdb2EICvPk; Facebook: Mervyn "DeepCobra" Seivwright; and @DeepCobra.

Flora Fiction is a collective of creative muses and inspiration. From original writing to reviews in music and entertainment, there's always something to be discovered. This forth and final issue of Volume 1, "Stillness & Solitude" has works of over 40+ poets, writers, photographers, and artists. Take a moment to enjoy.

"An Unforgotten Path," "From Athens to Tellico, Tennessee " and "An Assault Rifle Ode"

"My Peace in Scheveningen"

Mervyn Seivwright's Poem "My Peace in Scheveningen," Page39, in the 2020 Edition of Common Threads by the Ohio Poetry Association.

Volume Three, Issue 1 Mervyn R. Seivwright: "I was born in London, England. I have appeared in Park University's The Scribe publication, Dayton's Flights Literary Journal and have been commissioned by the British Museum, Ipswich, United Kingdom. I am currently studying for an MFA in Poetry at Spalding University, Louisville, Kentucky and residing in Tipp City Ohio."

Moments for a Legacy

Life of a Writer: Fall Edition

Culture Matters presents: the launch of Cry of the Poor

39;Whoever has will be given more; whoever does not have, even what they have will be taken from them.&#39; - Matthew 25:29 We need to change the system. We need to overthrow, not the government [...] but this rotten, decadent, putrid industrial capitalist system which breeds such suffering - Doro...

Mervyn R. Seivwright is from a Jamaican family and was born in Dulwich, London, England.

During times such as these, poetry is often one of the vehicles that reminds us of the importance of bearing witness. Mount Island's Lucy Terry Prince Prize has come to a close and we are excited to announce our grand prize winner, Brittny Ray Crowell's "Blood Petition: A Prayer of Reckoning."

Life of a Writer: Spring Edition

Theresa Carey's (SW) creative thesis screenplay Mestengo (written under the tutelage of mentor Sam Zalutsky and polished under mentor Larry Brenner) is on a roll these days!

Life of a Writer: Winter Edition

‎A podcast where we talk about grief, moral injury, and other spiritual health issues.

Life of a Writer: Summer Edition

International poet, a nomad constantly traveling to touch and inspire hearts. Mervyn R. Seivwright (Deep Cobra), is an English born Jamaican, that has grown up in the United States. He has lived and traveled between Asia, North America , Europe. This being the foundation of experiences that inspired his poetry while still in school.

Hi Mervyn, can you tell us a little bit about yourself? Hi Nicola. I am a poet that believes in social change one person at a time. My writing has developed along those lines influenced in travels and living in different countries around the globe such as England, Japan, Germany, and America; travels to more than 40 countries.

Life of a Writer: Autumn Edition

Mervyn Seivwright, retired Air Force Master Sergeant, is an accomplished and published poet and Haiku master. He will present a poetry reading at the Black History Month luncheon at the Wright Patterson Club, Feb. 23, from 11 a.m. to 1 p.m.,

RAF MILDENHALL - Tech. Sgt. Mervyn Seivwright doesn't consider himself a love poet, but in his new book "As Her Eyez Kiss," that's all he writes about. The 100th Mission Support Squadron airman plans to recite his new work Sunday during a book launch at London's Departure Bar.

Brixtongue is an established performance poetry night which takes place at Brixton Art Gallery every other month on the second Saturday. The next Brixtongue takes place on Saturday 8th October. Doors open at 8 pm, performance begins at 8.30 pm, and admission is £6/5. Some of our regular performers: Anjan Saha London based 'tablapoet'.

The Memorial lecture is a time for us to reflect on the heritage, contributions and achievements of Africans and descendants of the African Diaspora. To celebrate the collective journey, 'to speak' as W.E.DuBois stated 'of ourselves to a world that yielded us no true semblance or self- consciousness' / To honour those humanitarians whose vision and optimism enabled our society to embrace cultural diversity.

We arrived at LEONARDS EC1 for sound check at 5:35. Everything was supposed to be in place for a 5:30 sound check start. I was panicking because Mark the sound guy had not arrived. I got a call 10 minutes later; he's stuck somewhere (I was too annoyed to ask where exactly).

Poetry breathed into life from the mouth of a Cobra

A few hours before the semifinals of the United Kingdom's national poetry slam championship in London, the poet known as "Deep Cobra" was pretty serene for a man about to perform in front of a large group of peers and judges.

Trials Of A Stranger

As Her Eyez Kiss

‘Blood, Tears & Hope: Poetic Expressions of the Human Condition’ looks at the day to day issues that make major changes in our lives. Items of painful hurt to family members or ourselves that drive us to change the course for others following the same path. Through poetry this brings awareness and shares thoughts of hope with an outlook to move on. Not waiting for the awareness to be the moment instead of the months we have to live, or the things around us that we pass each day. An awakening...