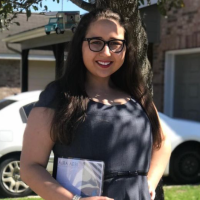 I’m seeking a role that utilizes the communication and design skills that I’ve already honed in marketing, public relations and journalism. My most recent role was as an associate at a successful public relations firm in The Heights, however I was laid off due to coronavirus. Before that, I served as a marketing coordinator for Kevia and JourneeBox, a subscription box that I directly oversaw the launch for. In that role, I interpreted analytics to implement strategic marketing plans, designed web and email content, and sourced products from vendors — as well as designing the packaging and products themselves.

As a publicist, I was responsible for assessing a client’s outreach goal and crafting pitches around that goal, as well as finding aligned media and speaking. I have also “ghostwrote” for clients in many publications including MindBodyGreen, the Portland Business Journal, the Puget Sound Business Journal and more.

Before PR, I was the features/lifestyle editor at a newspaper that publishes five editions per week. I was responsible for daily pagination using InDesign, managing interns, overseeing the creation of magazines, managing social media and other editorial responsibilities.

I graduated from Texas State University in communications, with an emphasis in journalism, and a minor in sociology. Before my position at the paper, I worked two unpaid internships for two separate radio stations, KTSW 89.9 and NPR’s KUT 90.5, during my senior year. For both stations, I worked as a news reporter and produced daily content. I am passionate, hardworking, friendly and committed.

Recommendation from Kate Aconfora, Director of Communications for Coca-Cola

'Love is in the Air'

This most recent Valentine’s Day had one San Marcos company showing their love in an unconventional way.

While the love between dogs and humans date back almost 40,000 years, many of us homo sapians are still learning how to coexist with canines while maintaining the position of alpha in cross-species friendships. Ashley Engelhart works as a medium for dogs and humans, breaking down the language barriers while training both owner and pet to work cohesively.

Last Friday, 13 descendants of a prominent Central Texas family that contributed to the foundation of San Marcos met in celebration of history, the future and even a birthday. What began as Bill Montgomery's 75th birthday celebration drew in more than a dozen relatives from the Montgomery family to the Cock House's weekly Cottage Kitchen event.

Last weekend, the Heritage Association celebrated the occurrence of its yearly home tour. This year's event kicked off with a preview party held at Kissing Tree, the event's presenting sponsor. The gathering featured 10 different local restaurants and dubbed itself "A Feast of Favorite Flavors."

Cutting a Pineapple Has Never Been Easier

While the debate of whether or not pineapple belongs on pizza is long from over, there is no doubt that the fruit plays a vital role as a summertime flavor. A properly cut pineapple can garnish tropical drinks, complete a fruit cocktail, complement a shish kabob, or give that signature look to your upside-down cake.

What Is the Difference Between Heavy and Whipping Cream?

Whether they are trying to perfect the scone or renew their grandmother's clam chowder recipe, every cook (sans vegans and the lactose intolerant) should be able to easily explain the difference between heavy cream and whipping cream.

In the Public Interest Discusses Education

(Originally aired in June) This In the Public Interest takes a look at the Central Texas Water Culture that exists in Hays County and throughout the Central Area. Hosted by Matthew Hamill and Taylor Zavala, we bring you stories that specialize in information detailing the impacts following the Memorial Weekend Flooding to the Central Texas rivers...

Laura Aebi News Reporter Since the early 90s, Native American tribes from all over the state have come together in San Marcos to honor their history and ensure their future by hosting a traditional powwow at Spring Lake. This year the Sacred Springs Powwow, hosted by the Indigenous Cultures Institute, included traditional dancers in full...