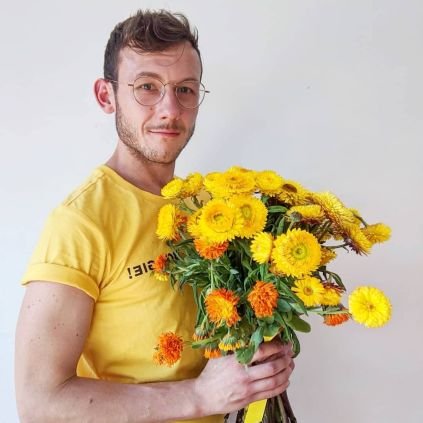 The truth is that most bellies do, in fact, bulge. We need to see that on our screens | Dejan...

ike most gay boys I had my sexual awakening at the underwear section of a department store. Most of the men in question were merely headless torsos with chiseled abdomens and sock-stuffed packages. Sometimes you'd shamefully lock eyes with David Beckham or Dan Carter as they caught you attempting to be nonchalant while you parade by your mother's hand.

was deep into Melbourne's second lockdown, writing an article on COVID's impact on queer nightlife, when my editor showed me queeringthemap. The interactive tool allows users to geographically map queer memories and landmarks, recording "the cartography of queer life". Sifting through notes pinned against Melbourne's most recognisable fixtures was beautiful and haunting; a showcase of...

Our society is obsessed with masculinity, and it's making me tired | Dejan Jotanovic

I went to my GP for fatigue. It's important to be diligent about your health when you're vegan. Low iron, low protein, low B12. But my doctor chucked in a new one: "Could be low testosterone."

"The White Lotus" Shines Its Tiki Torch on Settler Colonialism

In 1954, William Golding published Lord of the Flies , a thought experiment about the horrors that unfold after a group of British schoolboys are marooned on a desert island. Initially organizing themselves around the principles of democracy and governance, things quickly deteriorate: Hierarchies are formed, differences are sniffed out, tribes are negotiated, and a war is waged over power results in murder.

With our gyms closed, lockdown is a chance for gay men to rethink narrow body ideals | Dejan...

or many gay men Melbourne's lockdown has been nothing but agitation. Closed are our clubs and bars, our spaces to meet, dance, flirt; weekly activities that feel core to our history, identity and wellbeing. But, upon refreshing my feeds, it would seem that it's perhaps the closure of our gyms that might be causing the most collective anxiety.

Beware the Rise of the Queer Elites in TV's New Reboots

To say that New York City has had a rough 16 months would be a gross understatement. With more than 780,000 COVID-19 cases, more than 100,000 hospitalizations and, most tragically, more than 28,000 deaths, the city has been devastated by the global pandemic.

"Josie and the Pussycats" Predicted the Reigning Tyranny of Our Time

In 1967 French philosopher Michel Foucault presented a lecture to a group of architects. He invited them to consider ordinary places as something a little more distinctive: "...there are also, probably in every culture, in every civilisation, real places... which are something like counter-sites."

alking home from the shops one day I spotted a large advertisement for a local gym plastered to the side of a building. "Flatten the curve in 2021," it shouted. Fascinating, I noted, how it simultaneously played on the collective trauma of the past year while also signalling its intrinsic fatphobia.

I have to admit, I'm rabidly obsessed with skincare. I begin with a gentle foaming cleanser, massaging it into my skin for a full sixty seconds like the gurus recommend . A hydrating toner next; sprayed. I'll then dab in a peptide serum, wait to dry, followed by antioxidant-rich aloe vera-based hydrating serum to offset those free radicals.

Few things can scorch the internet as much as a man in a dress. After 39 Emmy nominations and 19 wins, one would think that RuPaul's Drag Race would've normalized an understanding that sometimes men dabble in feminine frocks.

The rising corporatisation of queer identity

Pride is politically messy. When you stir together an alphabet soup of people, all of which have other intersecting identities (race, class, religion, political allegiance), you will invariably plate up a political mess. And the 2020 Sydney Mardi Gras dished quite the menu.

Boys with muscles. No girls. Ever. Skinny boys in burgundy T-shirts and chinos? "There is nothing interesting nor cool about them". A few weeks ago a photographer's briefing document from Poof Doof, a gay dance party in Melbourne, leaked online and sparked outrage for its body-shaming and sexism.

Stereotypes and stigma: Drug use in the LGBTQ community

Judgement prevents understanding, which in itself is a barrier to preventing unsafe behaviour. Are different approaches to harm reduction in the Rainbow community needed? Sex. Drugs. Carly Rae Jepsen. This is the iconography that tends to be massaged into mainstream conceptions of gay culture. D

Can We Change the Direction of Gendered AI?

During last November's Cyber Monday, I bought a new home companion. She had a coral shell, an Australian accent, and answered to "Hey Google." The more we spoke, the more I thought about her consciousness. How was her personality programmed? What were her defining characteristics?

Opinion: This is how artificial intelligence is undoing women's rights

Voices Through AI we are unpicking the seams of what feminism and the women's movement has long fought for: agency, women's liberation and the idea that men and women have equal capabilities Before Siri and Cortana, pop culture offered up several versions of feminised artificial intelligence - but none of the artists perhaps envisioned how the reality could take us backwards rather than propel us into a new, more equal world.

One computer forecasting model claimed that if 80 per cent of Americans wore public masks the infection rate would 'plummet' - a recommendation the U.S. Center for Disease Control and Prevention had advocated since the start of April.

Revisiting "Chicken Run," the Film That Pecked out the Poultriarchy

Chicken bones. When we perish all that will be left is piles of chicken bones. And, of course, plastic. Or at least that's what the Smithsonian prophesied last December. After Popeyes updated its menu in summer 2019 with a record-breaking chicken sandwich this probably shouldn't come as much of a surprise.

Why do most people find us vegans so annoying? | Dejan Jotanovic

The vegans are at it again. 2019 - much like every year - has been a difficult one for us green-collared criminals. While supermarkets across Australia have seen overwhelming expansions in their plant-based offerings, public perceptions of our lifestyle remain as low as our feared B12 count.

I love you Taylor Swift, but please don't perform at the cruel Melbourne Cup | Dejan Jotanovic

Dear Taylor Swift, You've done something bad. Last year I took the plunge and publicly outed myself as knowing the lyrics to every single one of your songs, adamant that you deserved a Pulitzer for All Too Well. I've been to every one of your shows.

Netflix's Sabrina Is The Angry Young Feminist We're Looking For

In February, Netflix's Queer Eye debuted to gay screams and finger snaps across the globe. The eight-episode reboot followed a familiar format: the Fab Five help disheveled (often) heterosexual men come to terms with living in the modern world.