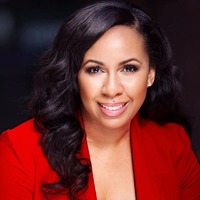 GlenNeta Griffin is an established Actress, Writer and Producer with numerous credits under her belt. She is a Communications Professional with over 24 years of collective experience in Entertainment, Film, and Television. Her passion is simply to tell amazing stories.

GlenNeta Griffin is an Atlanta based dramatic, comedic and inspirational writer with a passion to help others tell their stories through video, film and television. She has over 24 years of experience in Communications, Media, Film and Television and earned a Bachelor of Arts Degree in Public Relations and Marketing with a Minor in Journalism and Mass Communications from the Forbes School of Business and Technology at Ashford University. She is also a graduate from the prestigious Connecticut School of Broadcasting with specialized training in Radio & Television Broadcasting and Media Studies.

GlenNeta later pursued her Master of Arts in Film & Television at the School of Entertainment Arts at the Savannah College of Art and Design in Atlanta, Georgia and completed her Master of Fine Arts Degree in Creative Writing for Entertainment at Full Sail University. She enjoys writing and creating film and television projects in genres including, but not limited to drama and comedy. She enjoys combining the elements of drama, comedy and motivation to tell stories using serious and comedic tones.

"Sometimes we go through so many things in life that we have to laugh to keep from crying. I've experienced these trials and so have the people around me. I was told to write what I know. So, I do. That's why I love to write and create dramedies." - GlenNeta Griffin

GlenNeta is also the author of "Taking Back the Woman in Me," a book released in 2012 written to inspire other women to take charge of their lives. She aspires to join the writing teams of amazing shows to help others tell their stories and continue to create her own passion projects and see them come to life on the screen.

A Short Film By GlenNeta Griffin. Zoey tries to prove she can live on her own, but her daily life lessons in "adulting" don't come without growing pains.

Women of Color in Film, Television and Media Panel

Get TV Ready with GlenNeta Griffin