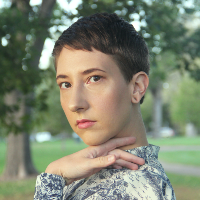 Elizabeth Estochen is a writer and editor with ten years of experience in publishing. They have a Bachelor of Arts degree in Media Studies from the College of Charleston, an advanced editing certificate from the Poynter Institute and a professional certificate in copyediting from the University of California San Diego Extension. They are a 2017 alumnus of Columbia University's Columbia Publishing Course at Oxford.

Lesbian funny lady Stamie Karakasidis was thrust into the limelight in season one of The Real L Word when she and her partner Tracy Ryerson shared the story of blending their family.

Riot Grrrls reunite-just when you thought Kathleen Hanna was through with making music, she's back. Her new band, the Julie Ruin, is named after her 1997 solo album, the one she released during the gap between Bikini Kill and Le Tigre, and features five members, including Kenny Mellman from the drag cabaret duo Kiki and Herb, and former Bikini Kill bassist Kathi Wilcox.

Natalia Leite and Alexandra Roxo could not have picked a more appropriate moniker for their new production company, Knockout Pictures. Not only are they incredibly talented filmmakers-between them they have written, produced, and directed; worked on narrative, documentary, and short films; and promotional videos for fashion designers-but they are a couple of knockouts themselves.

Allison Weiss Says What She Means

Feature on campsites for the 2012 Summer Guide

Who will survive in The Hunter?