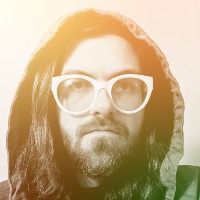 Dustin Krcatovich is a writer, musician, DJ, and insufferable contrarian currently based in Ypsilanti, MI (formerly Portland, Oregon). He is a journalist and critic with nearly two decades in the field, with bylines for Esquire, the Quietus, DownBeat, FLOOD, Riot Fest, Kerrang!, Under The Radar, Tiny Mix Tapes, and several other outlets. Reportedly, his writing once deeply offended a member of the Squirrel Nut Zippers.

"I'm so bored of talking about it, it's like sticking your finger in a wound." The Detroit electronic duo ADULT. are no strangers to wrenching, nigh-Cronenbergian imagery - among the more evocative titles in their catalogue are 'Glue Your Eyelids Together', 'Inclined To Vomit', and 'Violent Shakes' - but here, band cofounder Adam Lee Miller isn't riffing on ideas for new songs.

Sometimes, it seems like roughly 97 percent of all music exists primarily as a rebellion against the values of one's parents. Hell, considering the way many American parents voted in the last election, that rebellion is probably largely warranted these days.

Courtesy of Penelope Spheeris Above: Spheeris on the set of Wayne's World with Rob Lowe and Mike Myers. Penelope Spheeris likes to say that, had she not become a film director, she would have ended up in jail or dead. Born into a traveling carnival family, Spheeris spent her formative years in various trailer parks with an unstable alcoholic mother.

The Mysterious and Wonderful Music of Willis Earl Beal

"Avant-garde R&B." "Cracked blues." "Outsider music." It's no wonder that Willis Earl Beal doesn't hold critics in high regard, even when they speak favorably of his work (they usually do). Beal is a genre-defying polymath whose scope and approach can't be evoked in simple sound bites.

It should go without saying to most Riot Fest readers that Andrew W.K. is passionate about a lot of things: the party, music, kindness, the Party Party. However, few things stir his considerable well of passion more than pizza, and on that subject as much as any, Andrew's approach is radically inclusive and judgment-free.

Portland, Oregon, duo Brenna Murphy Golden Retriever initially got their name from a dream that their friend, the multimedia artist , had about them, wherein the two were together in a field surrounded by puppies of the breed from whence they borrow their moniker.

If not for Neil Hamburger, America's Funnyman, we likely would have never made it through the horrors of 9/11. If you need proof: Well, we're still here, right?

Joe McPhee/John Butcher: At The Hill of James Magee

At The Hill Of James Magee (Trost) By Dustin Krcatovich   |   Published April 2019 Given the respective reputations of saxophonists Joe McPhee and John Butcher in the field of outer limits sound exploration, it's fitting that At The Hill Of James Magee, a 2010 recording just now seeing release, finds the duo collaborating-for the first time-not just on the edges of sound, but near the edge of civilization.

Album of the Week: Algiers

The Underside of Power Out Now via Matador When it comes to good rock and roll music, the best combos out there are the ones for whom the subcategories don't mean a thing. Really, though: how much rote emo, electroclash, chamber-pop, gangsta rap, witchhouse, garage rock (the '00s revival, I mean, not the actual thing), whatever, has ever held up past its sell-by date?