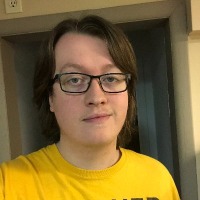 Caudill has over four years of newsroom experience, first working as a reporter and editor for The Sunflower, Wichita State's student-run newspaper. He also worked as an intern, a reporter, and later the digital content manager for The Derby Informer, a weekly newspaper in Derby, Kansas.

In spring 2020, Caudill worked in Topeka as the statehouse intern for the Kansas News Service, a collaborative news wire between four public radio stations in Kansas, including KMUW.

In summer 2019, Caudill contributed stories and photos to the Flint Hills Media Project, an applied-learning magazine project at Wichita State.

Caudill's work has been picked up by The Associated Press and has appeared in the U.S. News & World Report, The Washington Times, The Wichita Eagle, The Emporia Gazette, The Shawnee Mission Post and more newspapers across Kansas.

Maia Cuellar Serafini is one of the baristas leading a union drive at the Starbucks on 21st and Amidon. This is her first time trying to unionize a workplace, but the 24-year-old is no stranger to the concept, as her father was a longtime member of the Kansas teachers union.

Workers at a Starbucks in Wichita hope their store will join the nearly 60 others around the country with a union. Employees at the Starbucks at 21st and Amidon filed for a union vote with the National Labor Review Board (NLRB) on Friday. It's the first store to do so in Wichita and the second in Kansas.

Hundreds flock to Andover to help clean up after tornado

Hopeful volunteers filled Andover United Methodist Church on Tuesday to help clean up after a tornado shook the town over the weekend. Organizers estimate more than 500 people signed up to volunteer. Some volunteered on behalf of groups like churches or McConnell Air Force Base, while others showed up to help on their own accord.

It's game night at Wichita State University, and members of the varsity esports team are practicing just before their match. Inside the esports lab, there's a lot of what you might expect from athletes in a traditional locker room: jokes, banter, discussions about the match ahead.

Afghan refugee one of 400 making a new home in Wichita

Far from home, a refugee builds a new life in Wichita.

Comic book store owners in Wichita say the pandemic is causing more people to nerd out.

Polling places in Kansas are required by law to be open, but this year's primary and general elections might see fewer in-person votes and more by mail. The latter is a safe and convenient option in the time of coronavirus, but comes with its own costs and challenges.

A few weeks ago, University of Kansas senior Fatimah Alsinan was in a workshop finishing the last design and construction projects for her architecture degree. Now, she's meeting with classmates online, reviewing premade blueprints and building projects with K'Nex and Legos at her apartment.

Kansas Moves To Get Suspended Drivers Back On The Road, But Some Say It's Not Enough

TOPEKA, Kansas - Kansas has one of the highest rates of suspended drivers in the country, and the majority of those more than 215,000 licenses are suspended for unpaid fines or court fees - sometimes unrelated to driving. Both the Kansas House and Senate approved separate bills last month aimed at getting drivers back on the road.

TOPEKA, Kansas - Wendy Couser, a former juvenile intake officer at the Newton Police Department, has always believed in the importance of consequences. But Couser feels that she's yet to see consequences for the law enforcement officials who beat, shot and killed her son, William "Matthew" Holmes, during an arrest in August 2017.