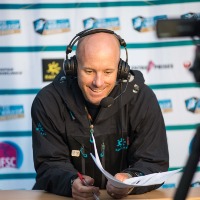 I am a British writer and broadcaster with a broad spectrum of experience across different media formats. My writing “career” began with an article in my high school magazine and I have since written for National Geographic, Adidas and Red Bull as well as countless magazines, blogs and websites. For the last 4 years I’ve been in charge of winter content at FATMAP - a revolutionary outdoor adventure platform - managing contributors and writing extensively myself. I also wrote and formatted a 450 page guidebook to the mountains of Chamonix, France, which was released in 2016 and has sold over 12,000 copies.

For the past 5 years I presented and commentated on the live coverage of the International Federation of Sports Climbing (IFSC) World Cups in Europe, China, Japan, India and the USA, as Sport Climbing prepared for its (delayed) Olympic debut in Tokyo. I also produce and present a successful sports podcast. Previously I presented for a Formula One Racing website and for a daily show on EpicTV which ran for 400 episodes. All of these jobs required extensive script preparation and copywriting.

To make a difficult skill look easy is to be a true master of it. In claiming this year's World Cup, New Zealand have mastered the simplest yet most difficult and elusive skill of all; winning.

As my watch beeped twice to signal that 4 a.m. had arrived, I glanced up at the outline of the Tre Cime peaks of the Italian Dolomites to see if there was any sign of light in the sky.

Mera and Island Peaks - Into the Heart of the Khumbu

Truly one of the World's classic mountain expeditions, this trip should be on any hiker's bucket list. There are sections of alpine climbing on the trip but none of the mountaineering is technically difficult and the skills required to complete this expedition are attainable for anyone fit and willing to learn.

Forget cramponing down a death defying ridge before leaping over gaping crevasses - the Vallee Blanche is not what you might imagine. That said, it's no pushover either; Charlie Boscoe uncovers the truth - let's put the top ten Vallee Blanche myths right.

To round out what has been a packed IFSC World Cup season we headed over to Asia for the 3rd time in 2019 for two Lead World Cups and the final Speed event of the year. The 2018 season also ended with a 2 week trip to China, and for me the October trip always has an "end of term" feel to it.

A legendary ski line beneath the imposing north face of Mont Blanc, the Trappier is a mythical couloir which can only be skied when conditions are right. I skied it with 3 friends in 2013 and the trip turned out to be memorable for tragic and unexpected reasons.