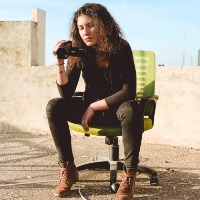 Portuguese journalist, writer and producer focused on Human Rights, Environment and International Affairs. Highly interested in exploring consciousness, travelling into the depths of the human heart, I'm a lover of nature and all its creatures.

A human being in progress that assumes privilege as a responsibility. With a bag full of curiosity and enthusiasm about the world, my biggest passions are connecting people and holding space for magic to happen. I intend to contribute to a world sustained in empathy, compassion and freedom. I believe in the power of community and dream about a revolutionary way of being, more politically aware, sustainable and connected.

A believer in the transformative power of storytelling, I perceive words as ancient keys to liberation.
Highly adaptative, used to explore reality and its rawness, always ready to hit the road.

For three years, I've been producing an independent documentary in Palestine, "Bukra", focused on the different forms of peaceful resistance to the Israeli occupation in the Jenin refugee camp.

Throughout 2021 I lived in Berlin and worked as a correspondent journalist for the European awarded Luxembourg-based newspaper Contacto, collaborated with the investigative journalism project Setenta e Quatro and dived into the beauty of creation through independent filmmaking, event production and creative writing.

Studied Journalism and Communication Sciences. After four years of experience as a freelance reporter for different publications and online media, among them, P3, from Público, moved to Boa Vista, Cape Verde, in Africa. There directed and restructured a Community Radio for seven months and worked as a stringer journalist for "Bloomberg".

Back in Portugal, began my master studies in International Affairs, while working for two startups in Los Angeles as a communications manager.

In February 2017 joined the team of Jornal i as a reporter focused on Human Rights, Environment, and Alternative Lifestyles. Reported from 12 countries, created the weekly segment "Generation I", dedicated to the study of the Millennial generation in Portugal and travelled through the Balkans for 31 days by bus and train.

In the realms of event production, I contributed with projects such as Waking Life Festival, NLP Academy, Enara Fest, Primal Gathering, Cultivation Berlin, among others. I've produced my own gathering "Balolas Fest" and a fundraiser event in Lisbon "Yala", that attracted 630 people for a day of music, art and talks about Palestine.

I've started my journalism path some years ago, so please scroll down to dive into my work :)

Read writing from Balolas Carvalho on Medium. Journalist//Writer//Traveller //Living in Lisboa// I live for writing and write to live // Producer//. Every day, Balolas Carvalho and thousands of other voices read, write, and share important stories on Medium.

In love with life, she has always asked many questions, and was never satisfied with easy answers. With skinned knees, typical of someone who enjoys life with body and soul, who grew up traveling in the stories and fantastic worlds of the people with whom she crossed paths.

Are you ready to wander around, guided by locals, through the streets and restaurants of Portugal? Choosing only one of our many deals will not be easy, be warned! Portugal has its heart and doors open to welcome guests, readily revealing them how to get the best of the nation, so, whatever option you might choose, trust you'll be in good hands.

How spirituality is the secret sauce to your work

Listen to this episode from Der KAOS Fresh Positions Podcast on Spotify. We all have an idea about what spirituality means. wearing yoga pants and looking sexy, burning Palo Santo and howling at the moon. But seriously: spirituality can be the secret sauce to being a great team member and someone who's doing amazing work.

One example of the podcasts produced for Radio Voz d'Bubista

Interview to Cristina Duarte, First Woman Standing As AfDB Boss Wants African Wealth Retention One of my contributions to Bloomberg in 2015

(Bloomberg) -- Cape Verde started work to improve the quality of water supplies to the towns of Patim and Cova Figuera on Fogo island, and will commence similar works on Brava island on Jan. 19, Inforpress reported.

(Bloomberg) -- The shooting of the son of Cape Verde's Prime Minister Jose Maria Pereira Neves on Dec. 30 is an attack on the state and can be linked to the murder of the mother of a police inspector in October, the government said.

Cristina Duarte, the finance minister from Cape Verde who is the first woman to stand for the presidency of the African Development Bank, said the lender should encourage wealth generated in Africa to stay on the continent.