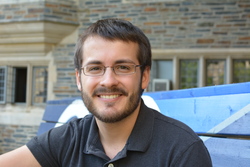 I write for the Houston Chronicle. After a few months as a copy editor, I will soon transition to a suburban reporting role.

In fall 2015, I wrote a series about refugee resettlement in Houston, America's No. 1 destination for refugees. I've covered everyday events like a hospital opening and bridge demolition, explored religious diversity, and written light pieces about a girl on a sheep at the Houston Rodeo. (If you don't know what mutton bustin' is, you should learn!)

I graduated from Duke University in May 2015 with a political science major.

After the Jan. 2015 cancellation of the Muslim call to prayer at Duke Chapel, I wrote a long-form investigation that dug deep to answer the questions left unanswered by national media.

Check out my clips: in-depth reporting, politics & government, opinion columns, and Duke Date Lab. They cover LBJ and civil rights, Brazilian politics, U.S. national security, and more. I was also Duke's student speaker at Commencement 2015, and I co-directed a five-minute documentary video about a Latino grocer in Durham, NC.

A cowgirl's moment of truth

Meredith Stockholm was supposed to have the ride of her life on Thursday. The announcer at the Houston Livestock Show and Rodeo whipped the crowd into a boot-stomping frenzy. As he introduced Meredith, the cheers crescendoed in the white-topped tent near the carnival.

At the Houston Rodeo, Cowboy Church endures with faith and devotion - if not cowboys

At the start of "Cowboy Church" last Sunday, morning light shone through the 8-foot-tall windows behind Ronnie Moyer in the makeshift sanctuary on the second floor of the Houston Livestock Show and Rodeo. Moyer, a youth chaplain with the Fellowship of Christian Cowboys, heard a different call as he grew up rodeoing on the Western plains: to become a roper of young people.

Near midnight, these are the people of the Houston Livestock Show and Rodeo

City of Refugees: Resettlement in Houston

For Syrian refugee in Houston, feeling of safety stripped away

Gov. Greg Abbott announced that he intends to block new Syrian resettlement and to monitor those already in Texas, and Republican presidential candidate Donald Trump has vowed previously that he would send Syrian refugees already in the United States back to Syria.

Greater Houston resettles more refugees than any other American city

Ali Al Sudani did not know who wanted to kill him. In the chaos of southern Iraq in 2004, anyone could become a target: translators, journalists, teachers. Al Sudani even knew a barber who was assassinated. So when he started to receive anonymous threats, he knew he had to leave his job translating for the British army.

Coming to Houston, not knowing a soul

From a Burundi massacre to self-sufficiency in Houston

In 2004, Jeune Ruhumuriza was a child sleeping on the hard ground of Burundi, in a U.N. refugee camp, when a Congolese militia massacred over 100 of his fellow refugees. Today, he is a young Houstonian with dreams of an easier life. By logging in, you agree to the Terms and Conditions and Privacy Policy.

The project is to improve a major bicycle commuting route that runs into the heart of the city, while also repairing a street that all parties agree needs some TLC. "The pavement is in horrible condition," said Mary Blitzer, government and community affairs manager at the nonprofit advocacy group Bike Houston, who rides West Alabama every day to get to work.

The Memorial Hermann healthcare system has announced plans for two retail-style medical centers in the Greater Heights, part of the private provider's expansion of its Houston-area offerings. Dr. David James, CEO of Memorial Hermann Medical Group, said that when patients access the most appropriate level of care, they save money and time - and emergency room beds stay available for more critical cases.

It's the end of the road for a historic bridge on the southern edge of the Heights. The Texas Department of Transportation said the Yale Street bridge, which crosses White Oak Bayou and dates to 1931, will be demolished in the next six months.

Interfaith Ministries focuses on reality of diversity in annual dinner

Ali-Khan told that story recently at a dinner hosted by Interfaith Ministries for Greater Houston, the nonprofit best known for operating the Meals on Wheels program. Shia and Sunni Muslims, Baptists and Presbyterians, Baha'i and Hindus, Jews and undeclared seekers.

This Side of the Counter

By Andrew Kragie and Julia Rogers. A five-minute documentary made in the one-week Duke Documentary Studies Video Institute. Explores a Latino supermarket that serves a food desert area in East Durham.

'A second best decision': Why the call to prayer was moved from the Duke Chapel

When Duke canceled plans for a weekly Muslim call to prayer, or adhan, from the Duke Chapel, many who opposed the cancellation claimed that the University had caved to conservative evangelical Franklin Graham and the financial boycott called for in a Facebook post where he called "on the donors and alumni to withhold their support from Duke until this policy is reversed."

Brazil: Aftershocks of the 2013 Protests

A year after a wave of mass demonstrations shook Brazilian politics to its core, experts said that the protests have resulted in a few real changes-stopping short of the "structural change" that demonstrators demanded.

'On the Heels' of a Dream

The Rev. Luke Powery came to Duke at a momentous time. His first year coincides with the 50th anniversary of Duke's first black undergraduates, and he is the Chapel's first black dean. Powery's approach to balancing leadership and race offers a surprising contrast to the way other black leaders have cast themselves-President Barack Obama being the most notable example.

The Real Story of Civil Rights Leadership: LBJ the Dreamer & MLK the Strategist

History remembers Lyndon Johnson as the consummate politician--the 'master of the Senate'--and Martin Luther King, Jr. as orator whose words inspired the nation. But the truth is more complex, and more interesting.

National Interests Worth Fighting For?

By Andrew Kragie It's been a hell of a month. The United States has faced three international crises: a Russian-supported insurgency in Ukraine, a growing Ebola outbreak in West Africa, and a terrorist group that has taken control of vast swaths of Iraq and Syria.

Lyndon Johnson spent twenty years in the U.S. House and Senate voting against every civil rights bill until 1957, when he decided he would run for president in 1960. As president, he pushed through the most significant civil rights legislation since the Civil War. Was his presidential endorsement of civil rights driven by political calculus, was he looking to his legacy, or was he genuinely committed to civil rights and racial equality? Was his pro-equality attitude a sudden conversion, a...

National Security and the West Wing - An Interview with Jake Sullivan

Last week, DPR's Andrew Kragie sat down with visiting American Grand Strategy speaker Jake Sullivan the day before he flew to Geneva to continue nuclear negotiations with Iran. Sullivan served as National Security Advisor to Vice President Joe Biden, Deputy Chief of Staff to Secretary of State Hillary Clinton, and as the Director of Policy Planning at the U.S.

By Andrew Kragie. If you haven't yet seen "Selma"-stop reading and buy your tickets now. It powerfully and beautifully tells the story of a community that, with a team of civil rights leaders, made history. Like many historians of the era, though, I was taken aback by the film's portrayal of Lyndon Johnson.

Should We Stay or Should We Go: The Shale Revolution and American Involvement in the Middle East

A month before the presidential election in the United States, almost 15 million Venezuelan voters went to the polls for the first truly competitive presidential race in 14 years. The Venezuelan opposition to Hugo Chávez united behind an energetic and charismatic challenger, Henrique Capriles.

The resume, the road and the dream

Joel told me that I wouldn’t find a good internship—unless I actually wanted one. He proposed a heresy that didn’t fit with any of my plans or expectations: Maybe I don’t need to do an internship this summer. Maybe I need to ignore my resume, hit the road and pursue an unmanageable dream, like Emma and E.B. White did. And maybe the pursuit of that dream will lead me to whatever truly lies down the road.

Hidden Costs of the Federal Shutdown

The government shutdown is hitting close to home—800,000 government workers’ families are going without pay, many near my hometown in the D.C. area. Although they will eventually receive back pay, many families are limping along without a paycheck. Less important in human terms but more important in terms of cuteness, we can no longer watch pandas cuddle on the National Zoo’s Panda Cam. But there’s a bigger hidden cost that we would regret in 50 years: The shutdown could lead even more of the...

Date Lab: Searching for a Spark - The Standard

Two seniors like sports. Will they like each other? By Andrew Kragie, Emily Cohen, and Susanna Booth He's "a true gentleman" from the South looking for "someone who is fun to talk to and likes to have a good time." She loves Duke athletics, plans to work in nonprofits, and seeks a good conversationalist who's "passionate about something in life."

He's a Mechanical Engineer from California, and agreed to go on a blind date because "How common are blind dates anymore?" She's an out-going, sport-loving Chemistry major, loves the beach, and agreed to do Date Lab because, "What was there to lose?"