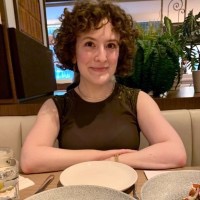 NYC-based copywriter, content strategist, and screenwriter with 5 years of diverse professional experiences, including tech, government agency, law firm, entertainment, e-commerce, and editorial. My writing has been featured by Reductress, Romper, and The Stir.

Most recently, I wrote a Fleabag spec script with Alexis Pazmiño. Our short film, "M for Maritza," won the Television, Internet & Video Association of DC Peer Awards Student Production: Fiction (Bronze) award and was a Semi-Finalist at the Nassau Film Festival and an Official Selection at the Astoria Film Festival.

Currently, I'm developing two TV pilot scripts. I perform stand-up comedy in NYC at venues including The PIT and The Stand.

I wrote the copy for Korean K9 Rescue's GoFundMe page in support of their May 2020 Giving Tuesday campaign. The campaign surpassed the organization's goal by raising over $31k.

I wrote and revised the copy featured on this landing page for the launch of Pastel's new brand, Sphere Alarm.

I wrote and revised the titles, bullets, descriptions, and A+ copy for all three Sphere kits on Amazon.

I wrote and revised the titles, bullets, descriptions, and A+ copy for the Equipt Solar LED and Double LED product listings on Amazon.

Announcement from the COO

An email announcing the upcoming launch of a new GPS platform from Pastel's COO. I wrote the copy in his voice and formatted the email on Mailchimp.

Friends and family email from the COO

An email from Pastel's COO promoting a friends and family discount on the new Sphere Alarm system. I wrote the copy in his voice and formatted the email on Mailchimp.

An email promoting a discount on the Sphere Alarm system. I wrote the copy and formatted the email on Mailchimp.

With its new regulations for operating dockless vehicles, the District Department of Transportation (DDOT) displays a commitment to ensuring the availability of dockless technology in SE DC.

When an organization needs to overhaul its financial management system, it often adopts an enterprise resource planning (ERP) system that brings with it standardized business practices and the opportunity to boost auditability.

A New Day At DFHV - A Note From the Director

An introductory blog post written from the perspective of the agency's new Director. I interviewed the Director about his background and wrote this piece in his voice.

For Allan Schanbacher and Chris Gangi, building Kreeky Tree Farm was a natural progression in careers devoted to gourmet food and sustainability.

From Pro Golf to Cannabis Cultivation

The Story of Marshall Davis Professional golf and cannabis cultivation might not seem like they belong on the same resume, but Marshall Davis has had storied careers in both professions.

Delmarva Conserves their Wetlands with the Help of PittMoss®

For Clark DeLong and Jillian Parisi, establishing their nursery, Delmarva Native Plants, was a logical next step in careers dedicated to conserving wetlands in the Eastern Shore.

Growing in PittMoss and Improving the Bottom Line

When Perry Miller of Indiana-based Miller's Greenery told his wife about the results he achieved after growing plants in PittMoss®, it sounded too good to be true. "My wife didn't believe me at first," said Perry. "Then, after a week, she did. She could see the difference."

When sustainable landscaper Kirstie McCullough of Sustainscape, Inc. entered the industry five years ago, she quickly realized that conventional landscaping practices were detrimental to Florida's environment.

Overcoming the Stigma of Medical Marijuana, and the Challenges of Growing Cannabis A man who lost function in part of his brain after getting hit in the head with a golf ball. Cancer patients. Parkinson's sufferers. People with chronic insomnia. Even a dog with seizures.

'Tis the Season for Growing Cold Crops with PittMoss®!

As temperatures drop and gourd-centric holidays come and go, many gardeners may find themselves wondering what to grow in cold weather. Luckily, certain crops thrive during cooler seasons due to their resistance to frost and extreme temperatures. Think greens, root vegetables, and onions for a wonderfully hearty stew;

Taking a Sustainable Risk with PittMoss®

A Grower's Story When New Jersey-based startup Sunset Farmstead began their growth trial with 3,500 plants in a mix incorporating PittMoss®, they didn't know quite what to expect. "We're not a giant farm, we're a startup business," their lead grower said, requesting anonymity.

Hellion Magazine - A Scarification Artist and His Client Talk About the Growing Appeal of...

(Image courtesy of Ryan Ouellette and his client Russell) A Scarification Artist and His Client Talk About the Growing Appeal of Scarification In the age of Instagram, people are constantly searching for the one thing that will up their cool factor.

A spec script for an episode of Fleabag co-writtten with Alexis Pazmiño.

Maritza fantasizes about standing up to racist and sexist coworkers. After one too many slights, fantasizing isn't enough. This dark comedy explores the ways men, and even other women, often fail to support women of color in the workplace.

A longer version of our script for M for Maritza. It was an official selection for the Oaxaca FilmFest in both the Global Script Challenge and the Comedy category.

9 Sea Creatures Who Want You to Love Your Weird, Lumpy Body Just the Way it Is Right Now

In our beauty-obsessed, media-soaked culture, it's easy to feel like your odd little body isn't good enough. Everywhere you look, there's a Photoshopped model in a bikini to compare yourself to. Well, these adorable sea-dwelling animals think you're perfect just the way you are!

Ask the Dowager: Love and Dating Advice from the Dowager Countess of Grantham

The disheartened writing staff of The Newsroom regroups after receiving heavy criticism for the show's first season.

Cookie Reveals Her Miscarriage On 'Empire,' & It's An Important Story To Be Told

It was obvious from Empire's pilot episode that Cookie was tough, but in the show's mid-season premiere we learned just how much adversity she's had to overcome. After the loss of Rhonda and Andre's baby, Cookie poured her heart out to her eldest...

Will Lucious Get 'Empire' Back? He'll Fight Tooth & Nail For His Legacy

Empire viewers were stunned when Lucious Lyon was removed as CEO from his own company. In the fall season finale, Empire Entertainment's Board of Trustees - spearheaded by Hakeem's former lover Camilla - voted to oust Lucious and appoint Hakeem as...

Is Rhonda Dead On 'Empire'? Don't Count Her Out Just Yet

One of the most pressing questions on many fans' minds going into Wednesday's mid-season premiere of Empire is if Rhonda is dead or alive after being pushed down the stairs. At the time of the mid-season finale, Rhonda was heavily pregnant with...

Rhonda Loses The Baby On 'Empire,' & Her Assailant Is Still Unknown

For everyone who has anxiously waited since the fall finale to find out if Rhonda survived on Empire, we finally have our answer. Rhonda is a fighter. In the opening sequence of the midseason premiere, the mystery assailant with the killer pair of...

Is 'The Catch' Based On A True Story? People Have Been Conned Before

If the phrase "Shondaland" means anything to you, then there's a good chance you're looking forward to Thursday's new ABC show, The Catch. Mireille Enos and Peter Krause join the TGIT lineup in an exhilarating cat-and-mouse game between jilted exes....

What Does The Painting On 'The Catch' Mean? There Is Meaning Behind Ben's Gift

After only one episode of The Catch it is safe to say that Shonda Rhimes has done it again. The series, which revolves around a sexy and elevated game of cat and mouse, starts with a painting. The painting, which depicts a man and a woman embracing,...

What Else Has 'The Catch' Star Peter Krause Been In? He's Not Your Typical Con Artist

If you've watched anything on network television lately, you've probably seen previews for ABC's upcoming series, The Catch, the new Shondaland show . The newest addition to the TGIT lineup features Peter Krause as Benjamin Jones, a slick con-artist who dupes a private investigator (Mireille Enos) by posing as her fiancé and stealing her life savings.

Who Plays Danny Yoon On 'The Catch'? You've Probably Seen Jay Hayden Before

There are a bunch of new faces coming to ABC's TGIT lineup in the form of the new addition of The Catch to Thursday nights. In addition to Mireille Enos' Alice Vaughan and Peter Krause's Benjamin Jones, who play the cat and mouse characters in the...

Enjoy these magical photos from the wedding of Prince William and Kate Middleton -- the day they officially become the Duke and Duchess of Cambridge.

15 Quotes That Prove Princess Diana Had a Sense of Humor

The People's Princess had some great quotes.

15 Of The Most Interesting Facts About Prince Harry

Prince Harry used to be known as a party boy, but we know that there's much more to him than that.

These are the wardrobe pieces Kate Middleton can't live without!

15 Interesting Things About Kanye West That Might Surprise You (PHOTOS)

amp;nbsp; There are few public figures as exasperating as Kanye West is. It&#039;s impossible to know if his notorious persona is authentic or just a...

20 Times Prince George Was the Boss of the Family

Here are 20 times Prince George stole the spotlight from his very prominent family.

Queen Elizabeth Is Turning 90: Let's Celebrate 20 of Her Most Noteworthy Moments

Her Majesty the Queen is celebrating a very significant birthday. In honor of Queen Elizabeth II's 90th -- yes, 90th! -- birthday, which...

Take a look at our favorite moments of the Queen!

These are all the times where Prince William and Prince Harry defined brother goals.

In a world without financial woes, job stress, or unreliable childcare, it's possible to have a marriage as perfect as Will and Kate's. But ...

We're sure being a genius can get emotionally draining sometimes. So we understand why Kanye West -- rapper, producer, and fashion designer extra...

Physically perfect human Kendall Jenner has the distinction of being the hardest-working member of her family. The 19-year-old Fashion Week regular, a...

Let&rsquo;s take a break from talking about Kourtney Kardashian's personal life for a hot second. According to numerous reports, everything K...

Summer is ending and the dead leaf-laden season of fall is slowly wrapping its cold, spindly hands around our hearts. Let's cherish the...

Kim & Kourtney Kardashian's Luxurious Miami Rental Can Be Yours ... for a Price (PHOTOS)

Hey ... do you happen to have $70,000 to burn? Maybe you just sold off your Tesla Roadster or happened upon a trove of Spanish gold coins at sea. Why ...

Prince Harry recently shared that his late mother, Princess Diana, is the inspiration behind his charity work. Both Harry and Prince William honor the...

As far as famous siblings go, it's hard to top the star power of Prince William and Prince Harry. Even more than their royal titles and boyish go...

20 of Princess Diana's Most Memorable Quotes

Here are some of our favorite Princess Diana quotes. They're sure to inspire.

16 Times We Honestly Wanted to Be Kate Middleton (PHOTOS)

As a chaotic 2015 draws to a close, at least one thing is abundantly clear: It's good to be Kate Middleton. On gray and dreary winter days, we li...

Prince George and Princess Charlotte may still be young, but these two are making being royalty look extremely easy.