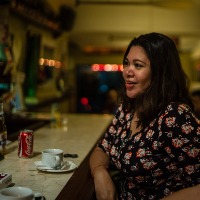 Shirin Bhandari is a freelance writer, photographer, and documentary filmmaker currently based in Manila, Philippines. Her work has been featured in the award-winning publications- Roads and Kingdoms and Anthony Bourdain's Parts Unknown which centers on politics, food, and travel journalism. Her articles and photographs have also been published on the Women's Media Center, Slate, CNN, and VICE. Shirin is a Logan Nonfiction Fellow for the Carey Institute of Global Good and a member of Woman Photograph.

Her first feature-length documentary film, “People of the Lake” is a finalist of the IF/Then development lab of the Tribeca Film Institute NYC. It completed a development lab with Asia Doc and the Logan Non-Fiction Program. The film won a production grant from the Film Development Council of the Philippines last September 2021. It is set to be completed in 2023.

Shirin Bhandari - The Show Goes On

In her long term documentation, Shirin Bhandari makes friends with the Golden Gays, a group of elderly drag performers in Manila. Her intimate snapshot portraits and dressing room scenes initiate a visual and emotional understanding for the lives, relationships and community of her protagonists.

Years after Marawi was liberated from jihadists loyal to the Islamic State, thousands of residents have not been allowed to return to their own land. Now, they face the government's backhoes contracted to flatten the remnants of their ancestral property to commercialize the city and make it a tourist destination.

Illustration by 'Hey, you around?' is VICE's new column asking drug dealers not just what they're selling, but how they're doing. Datu Puti *, 44, is from Manila, Philippines and has been selling all cannabis products (hash, herb, CBD, edibles, medicals, cartridges, etc), for 16 years.

In Overcrowded Manila, Cemeteries Are Homes for the Dead and the Living

Each week, Roads & Kingdoms and Slate publish a new dispatch from around the globe. For more foreign correspondence mixed with food, war, travel, and photography, visit its online magazine or follow @roadskingdoms on Twitter. Carolyn fetches a small bucket of water to fill the concrete vases. "Bend the stems," she says.

This village was once full of people. Now a tiny restaurant is its only sign of life.

Viet Ville used to be home to nearly 2,000 Vietnamese refugees who sought asylum in the Philippines. Today it's a rare stop for tourists who come to see its decaying remains-and want to sample Vietnamese food at the village's only restaurant.

What to know before you go to Manila

Manila is an underrated hub for art and culture, with a unique legacy of Chinese, Spanish, and American influences in architecture, cuisine, and customs. My hometown has a reputation for chaos. Overpopulation, traffic jams, natural disasters, and plenty of man-made ones. Manila is one of the in the world, home to almost 13 million people.

The Perfect Day in Amritsar

The sacred land of turbans and ghee, Amritsar is a city of about a million in the state of Punjab, in northern India. It is situated across the Pakistani border on the Grand Trunk Road, one of Asia's longest and oldest routes.

Amritsar was the end of the line. For years I travelled-and dreaded-the same route from Delhi to my father's northern hometown. It was the last stop by train along the plains of the Indian section of the Punjab region, and a gateway to the Himalayas. The train would start from Delhi filled with locals.

The Passion Play of Pasay

Penitence came on a hot and humid summer night. I was lost, walking through what seemed to be an endless concrete labyrinth, when I stopped to catch my breath and ask a group of women for directions to the town plaza. "You're still quite far," one of them told me.