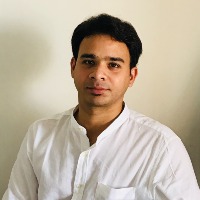 Kabir is an award-winning independent journalist who has contributed to the South China Morning Post, Washington Post, Foreign Policy, Caravan magazine, Al Jazeera and most recently worked as a national reporter at The Wire - India’s leading independent news site which attracts about seven million unique visitors each month. His reportage has covered poverty, agriculture, business, government policies, the environment and national security, and included filming video interviews, video stories and hosting a podcast series on climate change and food policy. He reported and exposed several instances of malpractices in government policies and window-dressing of accounts. He also uncovered, for the first time in the history of India, the political sensitive list of corporate houses who have not paid their loan dues despite having the financial ability to do so.

Most recently, he was part of two global collaborative investigative projects: The Pegasus Project and The Congo Hold-up.

Alongside his work as a reporter and journalist, Kabir has co-authored a book titled Chasing the Affordable Dream: A Plan To House Mumbai’s Millions on Mumbai’s affordable housing crisis and possible solutions to resolve it.

Awards, fellowships & grants include
- Berlin Energy Transition Dialogue Fellowship (2020): as a media fellow with a focus on India's clean energy transition
- Society of Environment Journalists’ grant: for stories on the destruction of the natural habitat of migratory birds in northeast India
- Water AidIndia's media fellowship: to report on the water crisis in urban India
- Red Ink Award (2018): for excellence in business and economy journalism for his reportage on farmer suicides in India’s largest state, Uttar Pradesh

New Delhi: The phone numbers of over 40 Indian journalists appear on a leaked list of potential targets for surveillance, and forensic tests have confirmed that some of them were successfully snooped upon by an unidentified agency using Pegasus spyware, The Wire can confirm.

Indian farmers, many of whom have been engaged for more than six months in protests against new agricultural laws passed by Indian Prime Minister Narendra Modi's government, are angry. Some have referred to their protest as the largest such mobilization in human history.

For Farmers Protesting in Delhi, Climate-Related Crop Damage Has Become the Focus

New Delhi: Thousands of farmers aggrieved by the 'apathy' of the Narendra Modi government marched in Delhi on Thursday. Divided into groups, farmers began walking from four different locations in the city and converged at Ramlila Maidan in the evening. Suresh Singh (56) had travelled from Rewari in Haryana.

New Delhi: Insurance companies have missed the deadline to recognise and pay claims worth over Rs 5,000 crore made by farmers under the Centre's Pradhan Mantri Fasal Bima Yojana (PMFBY) scheme, according to data obtained by through right to information (RTI) requests.

Was climate change to blame for India's glacier flood disaster?

Adani's Australia Story: How a Massive Coal Mine is Sparking a New Wave of Environmental Concerns

This is the third story in a five-part series that examines the controversial Adani and Carmichael coal mine. Read the first and second part. In 2005, 48-year-old Lindsay Simpson, along with her husband, Grant Lewis, decided to move to the warmth of north-eastern Queensland from the relative cold of the southern island state, Tasmania.

It was more than six months ago that Indian farmers started protesting against three new laws pushed in unilaterally by the government of Prime Minister Narendra Modi. The laws aim to change the way agricultural markets operate. But, from the very beginning, the protests have not been only about the intricacies of those laws.

New Delhi: Four years after the Supreme Court first directed the Reserve Bank of India (RBI) to disclose a list of India's wilful defaulters, the central bank has finally complied. In response to a Right to Information (RTI) application filed by The Wire in May 2019, the RBI has released a list of 30 major wilful defaulters.

Aspiration, Debt and Death: The Story of One Sugarcane Farmer is the Tale of Western UP

Muzaffarnagar: On the afternoon of January 6, 2017, Meenu Singh (39) was at home in Matheri, a small nondescript village comprising 950 people in Muzaffarnagar district, washing utensils after having served lunch to her family of five - her husband, her two teenaged daughters and her 10-year-old son.

COP25 Diary: Why the License to Pollute Could Make or Break UN Climate Summit

Kabir Agarwal from The Wire is in Madrid, Spain, to cover COP25. Follow our coverage of this important event here. Madrid: People holding up banners and posters with text in all caps greeted delegates as they walked in for day four of negotiations at COP 25.