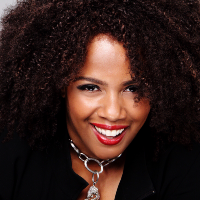 As a captivating multiplatform storyteller, global speaker, and on-air personality with an engaged social following, Jetta curates and shares unique trends and experiences in travel, lifestyle, and personal finance.

She is one of the stars of Bravo TV’s “Tour Group”, a luxury travel docu-series that takes viewers on a journey to some of the most exotic and exclusive destinations around the globe. Jetta also contributes to online and national print publications such as ESSENCE Magazine, BuzzFeed.com, Choose Chicago, Jetset, Orbitz, and Yahoo! and appears on stations such as WCIU-TV, KBS-TV (Korea), NPR, and iHeartRadio.

Jetta’s open mind, willingness to trek solo, and aversion to a staid way of thinking allows her the freedom to tap into a moment. She has been kissed on the cheek by Tom Cruise and a giraffe (not at the same time), received a marriage proposal by an African prince, embarked on a road trip across Cuba, partied with De La Soul, dined on barbecued mystery meat in Korea, talked about the deliciousness of karma with Robert Downey Jr., and served as a backup singer for an impromptu ukulele performance by Adrian Grenier and friends at the Florida Grill in DC.

Jetta co-authored “The Entrepreneur Within” and shares industry insight at events such as SXSW, Social Media Week, and Ad Week, New York. The Columbia College graduate, an avid “cultivator of cool,” can be found living life to the fullest on Instagram and Twitter @jettasetting.

Glamping in the Canadian Wilderness

How a Luxe Trip Helped a Reluctant Adventurer Tap Into Her Wild Side...

Need a break? Whether you crave a little pampering, an unforgettable holiday or a cool city escape, here's your chance to explore new places for less than the price of a designer handbag. Glamping in California | Wine in Argentina | Romance in Mexico

WITH BEACHES, MOUNTAINS, VINEYARDS AND ROAMING LIONS, THIS COUNTRY HAS IT ALL

The Art of Chill

You know when it is time to disconnect, get out of dodge, and snuggle up with your main squeeze. As everyone's time is at a premium, dashing off for an extended weekend is the cool solution for hot bonding time, but after the dance of syncing schedules is done, there's still the matter of selecting the perfect place.

Be they an average traveler or a veteran, global wandering thrill seeker, few would argue that just being in wildlife-rich Kenya can be an unsurpassed african adventure.

Beyond Bourbon Street: How To Do New Orleans Like A Travel Pro

My first trip to New Orleans as a 20-something college girl was all about drinking Pat O’Brien’s Hurricanes, hitting as many clubs as I could, and wandering aimlessly up and down the quarter with friends while munching on something crunchy. Sound familiar? But as travel rewards grow, and you get a few trips under your belt, the game switches up a bit. Tastes change and you yearn for different experiences (which means trying Popeyes in their birthplace just doesn’t hold the same thrill). But,...

Coffee shops double as second offices for many of us who travel or are remote professionals. There's nothing better than working in a space with tasty beans, yummy snacks, comfortable seating and a creative environment. Here are some great options (that I've personally experienced) to provide whatever vibe you may be craving so you can breeze through your to-do list.

While in the land of chic, I had to make my style trek in full regalia.

How To Master Your Moment

Whether you're an MC, a keynote speaker or a panelist, follow these rules to shine onstage.

Fear not savvy shoppernistas. Despite a challenging economy, you won't have to cancel fun outings or nix those splurges. We've scoured the nation, communed with industry insiders, and tracked down 25 deals to kick off the summer.

A sustainably designed kitchen is smart, lean and lasts a long time...

Everyone deserves great design, says Vern Yip, host of HGTV’s ‘Deserving Design.’ Liven up any living space to make a home worthy of jumping for joy...