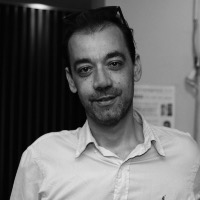 A political scientist and research analyst by training (graduate of KCL, UCL, SOAS, LSJ) turned to screenwriting and TV & Film research and PA.

With an extensive research experience (primarily political and social but also risk and business orientated) in various roles countries mainly from 2004 to 2012, I am now at the beginning of my involvement in screenwriting and TV & film research having thus far 24 credits as a researcher, 9 with Freeform Productions for "A Place in the Sun", Channel 4 and 15 credits from the doc series "Ap to mikro sto Megalo" done in Greece for the Parliament TV network.

As a writer I have 2 credits so far (one 30mins TV doc series episode, one short film), two commissioned works (first draft/final draft) while I ve had a decent response thus far from other unproduced scripts, namely my short script Stasis and my under-development projects Poster Girl (feature) and All Stars Lights Out (feature). I am also the winner of the category award "Best European Eye" at Oaxaca Filmfest Global Script Challenge in 2017.

While continuing working on my script projects I am now looking to join positions within research (primarily) or as a production assistant while I am also looking for collaborations as a writer, primarily in film or TV. Drawing from my diverse and extensive background in research and having a basic idea and experience from doc research, I aim at finding a position that could help me excel my competencies while applying my knowledge and skills. Major experience include non scripted reality (property) show A Place in the Sun for Channel 4 and two major assignments as a researcher for 15 and 13-episode bio and historical doc series for the Greek Broadcasting Corporation (ERT) and the Hellenic Parliament TV network "Vouli Tileorasi".

My exprience in film and tv, main education and other info

All Star Lights Out 1-pager

One-pager of my latest feature script "All Star Lights Out"

A research analyst by profession and training turned to screen writing and production assistant gradually since 2015. Currently working on two feature scripts while looking to take up research and production-related positions within the industry.

I come from a diverse background in political science and strategic analysis with years in institutional-led research with an extensive list of co/publications, research papers and projects, roughly f...

The trailer and the whole short film "Lucy".

Links to Articles and Other Videos