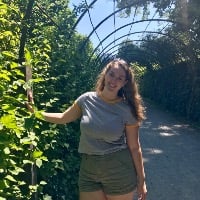 As a military brat, Liz Jacobson has lived all over the world and enjoys listening to everything from Led Zeppelin to Bad Bunny while drinking a large iced coffee. She is currently working her way through PBS' Great American Read.

Below are just some of my articles that she has written for the California Aggie.

In the Della Davidson dance studio, two young sisters argue in a room scattered with pens, nail polish, a checker board and a third new sister who was created out of rage in a cauldron. Assistant director Charlie Lavaroni, a third-year English and human development double major, calls a break.

Back in Northern California where his Big Wild project was inspired for his sold-out fifth stop on his "Superdream" tour on March 10, Big Wild transformed Ace of Spades in Sacramento into a true glimpse of heaven.

Tune into KDVS - The Aggie

In the basement of Lower Freeborn, KDVS is dominating the airwaves 24 hours a day, just as it;s done since the 1960s. The new school year brings both new programming and returning favorites. Students and community members tuning into 90.3 FM can expect a wide variety of shows.

Many young sports fans notice early on that the crowds of fans at women's athletic events are smaller than those of men's athletics events. They wonder why this lack of support continues to persist through high school athletics, college athletics and professional athletics.

Television: Forever This Alan Yang and Matt Hubbard creation stars the incredible Maya Rudolph and Fred Armisen and follows June and Oscar - a plain, seemingly content married couple who navigate the afterlife together. What the New Yorker calls a "big hearted satire," this show explores thought-provoking themes of love, hope and the time old question: what's next?

At the final UC Davis men's basketball game of the season, there were a few special fans in the bleachers cheering on the Aggies. Five UC Davis students enrolled in CMN 130: Group Communications partnered with Progress Ranch to give young at-risk boys the opportunity to cheer on and interact with their favorite players.

Weaving and Wordwork: A Scandinavian Design Partnership - The Aggie

Starting this academic year, UC Davis students are eligible for complimentary subscriptions to the New York Times and Kanopy, an on-demand video streaming service. These subscriptions were purchased by the UC Davis Library and are available on its .

Shorts buzzer-beater wins close game by one point - The Aggie

In an otherwise uneventful matchup between the UC Davis men's basketball team and UC Riverside, the last few moments of the game got the fans on their feet, when junior guard TJ Shorts II made a powerful drive to the basket with 7 seconds left. Shorts' layup brought the final score to 64-63.

Turn on any sports radio talk show in Northern California and the conversation will be focused on Jimmy Garoppolo - for good reason. The San Francisco 49ers' quarterback as of Oct. 30 of the 2017 season has made headlines most notably for his skill and trade from the Patriots, who may have lost their shot at a consecutive Super Bowl win by trading him.