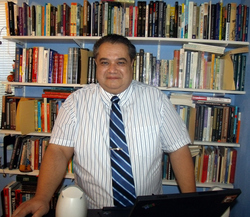 Francisco is a philosopher, writer, and journalist. Born and raised in Argentina, he lives in the United States since 1994 and is an American citizen. He is the Founder and President of Project Vision 21, a bilingual (English/Spanish), independent, news and consulting service agency, established in 1997 with main offices in Aurora, Colorado.

Francisco started his journalism career in January 1988, writing for several publications in Argentina. Later, he continued his career in Canada (1990-1994) and the United States (since 1994), in print media, radio, television, and Internet.

In February 1997, Francisco established Project Vision 21. This debt-free, minority-owned, DBE/SBE certified company provides services for several local corporations and non-profit organizations, and distributes daily stories and information in English and in Spanish for local, regional, and national media outlets. Francisco’s stories appear every week in more 65 newspapers and more than 45 web sites in the United States and in Latin America (syndicated by EFE News Services). During the past 15 years, almost 8.000 of Francisco’s stories were published by local and national media outlets.

DENVER - The economic crisis, changes in the laws and cultural differences have resulted in a large number of Hispanic children coming under the care of municipal agencies in Denver due to a lack of suitable Latino foster families. "Fifty-one percent of the almost 1,700 children in our care are Latinos.

Linked by Michael Levenston For $30 a year, a household receives the resources and technical aid necessary to grow vegetables and prepare nutritious meals. Latin American Herald Tribune June 9, 2011 ?Excerpts: DENVER - Dozens of Latino families in a low-income Denver neighborhood are taking part this summer in a project to grow their own vegetables as a step toward economic independence and food security.

Hispanic leaders and members of the community in Denver met with municipal authorities to ask for an investigation into the death of a 20-year-old Latino, who was gunned down by police after attending a friend's wake. At the meeting, which took place Wednesday evening, were Mayor Michael Hancock and other city officials, Fidel Montoya, the former Denver public safety chief, told Efe on Thursday.

Undocumented immigrants including children carry posters against deportation, as the flow of unaccompanied migrant children continues into the United States across the southwestern border; now evangelical groups are going to Central America to try and stem the tide.

Denver (CO), 18 sea (EFEUSA).- The Colorado House of Representatives passed two bills, Hispanic lawmakers driven, receiving the support of the local Senate, will allow drivers to challenge the validity of the initial contact they have with the police and regularized interaction between researchers and witnesses of crimes.

Denver, May 12 (EFE).- Authorities with the Adams County School District 14 in Commerce City, Colorado, announced an agreement with the U.S. Department of Education after the federal agency's Office for Civil Rights issued a report documenting discrimination against Latinos in the majority Hispanic district.

Social Justice for Hispanics Not Yet A Reality, Chicanos Say

Graduation Rate for Colorado Hispanics Up in 2009

Anti-Mexican sentiments persist in Colo. a year after massacre