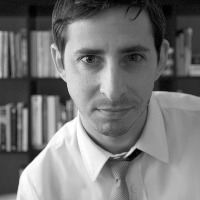 David Himmel is a creative mercenary always on the hunt for the best strategies to promote brands. He's also an award-winning journalist and the author of two books. His pursuits of the greater good have led him to be an oldies radio DJ, a marketing director, several different team mascots, the editor in chief of a health magazine, a Second City-trained actor, a stand-up comic, and the owner of three Volkswagen hatchbacks.

His strategic brand marketing talents have been utilized by a variety of creative agencies and businesses in the following categories: healthcare, education, food, gaming and entertainment, finance, and more. Himmel believes a sound strategy is paramount to the success of any project, be it identifying brands, developing digital marketing campaigns, producing videos, etc. He brings an exciting and unique form of thought to all projects, which leads to beneficial solutions for the brand.

His first book, "A Camp Story" (History Press) is worth the read as is his new book, "The Last DJ" (Literate Ape Press). He has also written well-received comedic plays on his own and as an associate artist with The Fine Print Theatre, and was the head writer on "Greetings! From Prison," the award-winning web series. He is co-editor and a contributor of the literary magazine "Literate Ape" and co-hosts the "Literate ApeCast" podcast.

Himmel is a Peter Lisagor Award winner.  He writes and edits for POLITICO Focus and has hosted a special episode of the POLITICO podcast "Pulse Check. Himmel writes the column, "Reasonable Hypochondria" for "Chicago Health" magazine. In May 2007, he wrote the first cover profile on Kim Kardashian for the now defunct "Racket Magazine." In it, he predicted exactly the Kardashian-influenced world we live in today. Blame Himmel. He deserves it and accepts it. He serves on the Associate Board of Gilda's Club Chicago. If you're not familiar with the club, you should look into it. It helps makes cancer less awful and is a far better use of your time than keeping up with the Kardashians.

He lives in Chicago with his creative director wife, their toddling son, and their silly puppy.

Tasked with truly differentiating itself from other secondary education options, I conceptualized and oversaw the production of an admissions video that pushed Fenwick’s brand into modern territory.

Led strategy for UX and UI design; drafted all copy and curated all content for launch in January 2017. This was a completely new website for the school, replacing it's old site.

Setting the Record Straight on Medicaid

Strategy and content development for brand positioning on Amazon.

The opinions within are that of a collection of apes with power to read and type. A forum for thinkers and artists and primates looking out from the jungle and wondering out loud about the messy state they see.