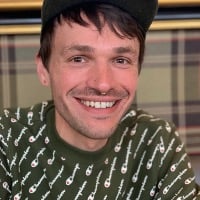 Chris Stedman is a Minneapolis-based writer, activist, and community organizer. He is the author of Faitheist, "an intimate and deeply affecting portrait… [that] proves [he is] an activist in the truest sense and one to watch” (Booklist, Starred Review). Chris has appeared on CNN, MSNBC, PBS, and Fox News, and has written for publications including The Guardian, The Atlantic, BuzzFeed, Pitchfork, VICE, CNN, MSNBC, Salon, The Advocate, USA Today, The Huffington Post, The Rumpus, The LA Review of Books, and The Washington Post. Since 2017 he has written a monthly column for INTO called “Exposed," and he is at work on a book about identity in the digital age, represented by Red Sofa Literary's Erik Hane.

The founding director of the Humanist Center of Minnesota, Chris was previously the founding director of the Yale Humanist Community and a fellow at Yale University, a humanist chaplain at Harvard University, and a content developer and trainer for Interfaith Youth Core. He currently serves as a fellow at the Sabo Center for Democracy and Citizenship and the Christensen Center for Vocation.

Details magazine named Chris one of "five next-gen gurus who are disrupting religion's status quo" and Mic called him "the millennial who's busting every stereotype about atheists." In 2018 Augsburg University selected him for their annual First Decade Award, which recognizes alumni "who have made significant progress in their professional achievements and contributions to the community" ten years after graduating.

Growing up queer in the Midwest, listening to country music felt like standing outside a party I wasn’t invited to — until I heard Kacey Musgraves.

The Enduring Appeal of Pop Stars Who "Flop"

Too Many Atheists Are Veering Dangerously Toward the Alt-Right

The difficult truth spotlighted by both Richard Spencer's atheism and the silence of other atheists is that religion was never the problem.

In the early ‘90s you were either Team Harding or Team Kerrigan. Once again we’re being asked to pick a side, but this time the choice couldn’t be clearer.

I'm an atheist, but I had to walk away from the toxic side of online atheism

I've lost a lot of my optimism about the power of online discourse.

The Musician Who Insists That Optimism Isn't Naïve

Joan As Police Woman's new record embodies a message that runs through all of her work: Embracing joy can be transgressive.

The Itch I Couldn't Scratch

Even our safest spaces aren’t guaranteed to stay that way, no matter how much we try to hide or protect ourselves from being truly seen.

Their costumes looked hot and clammy, but it was me who was sweating. I was about to meet real-life furries in the flesh.

Sharing highlights can also be a way of casting a beacon out to the people you care about to say: Yes, I’m going through some hard things, but things are alright.