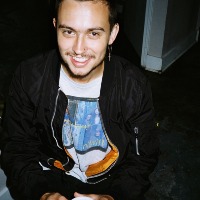 Nicholas Vila Byers is an Atlanta-based writer, scholar and abolitionist, who interrogates the premises of cultural resistance. When not writing, Nick provides legal support to people who are incarcerated, and volunteers with needle exchanges.

When she first stepped onto the scene in 2016, Chicago rapper Noname (born Fatimah Warner) made her outlook on fame clear in her very first lyric: "And I know, the money don't really make me whole."

by Nick Byers SAN FRANCISO, CA-I walk through the Tenderloin, San Francisco's tiny skid-row, every couple of months when I volunteer at Glide Memorial Church's soup kitchen on Ellis Street. In the Tenderloin, homeless men sleep under faded awnings, trans women strut the sidewalks, and one man shouts out "Warriors!"

All My Friends Are Dead: Listening To Trap

Trap music, despite prevailing as the most influential genre of rap music in the last decade and portraying the excessive violence experienced by Black youth, has not been given a full account in hip-hop scholarship or critical Black study.

She is clearing her throat between her screams. Raving about her sex life, or someone's lies, or the insincere apology of a fellow passenger. I look at her for a fraction of a second, averting my eyes with the rest of the bus when I notice that she's out of it.

Lonnie Holley's artworks are often profoundly intertextual. The centerpiece of his new album "MITH," is named "I Snuck off the Slave Ship," which also titled his recent solo exhibition at the Atlanta Contemporary Museum.

The Deaths and Resurrections of Mac Miller: A Flawed MC Who Was Reinventing Himself Until the...

When Mac Miller came up via frat-rap anthem "Donald Trump," the story was familiar. Following the model of Vanilla Ice, Marky Mark, Eminem, and countless other white men in the rap industry, Mac seemed destined for huge commercial success via cultural appropriation. When he released his first commercial album, just like his predecessors, Mac did well.

CARE FOR ME Turns Mourning into Masterwork

On "LIFE," the second single from his new album CARE FOR ME, Saba offers a devastating portrait of his current existence, rapping, "That's life-Momma mixed the vodka with the Sprite / They killed my cousin with a pocket knife." A bar later he mentions his formerly-incarcerated uncle: "He got out a year and then he died."

Dichotomy over Disses: Kendrick Lamar Gets Introspective on DAMN.

This past March, when questioned about his current preoccupations, Kendrick Lamar replied simply, On his new album DAMN., gone is the fixation with the widespread effects of the American music industry and the U.S.