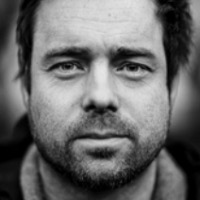 An internationally-published journalist, Simon's work has appeared in publications including National Geographic, The Independent and The Ernest Journal. He was the editor of Trail Magazine for nine years and is a contributor to the Country Diary, The Guardian’s century-old natural history column.

He joined the UK offices of National Geographic in 2019.

Through 22 stories and 130 locations, a photographer retraces a haunting 'pathway to genocide'

Photograph by Marc Wilson Photographs By Marc Wilson AT A GLANCE the photographs would appear to show any run-down backyard scene in Nondescript, Europe. A forest clearing. Damp-stained buildings with glowering, monochrome architecture. Concrete wastegrounds between tower blocks, the grey palate perhaps enlivened with a basketball hoop or a playset.

Photograph by Simon Ingram The day's been busy at London's Natural History Museum. It's the summer holidays and Hintze Hall - the vaulted centrepiece of Kensington's gothic-towered edifice - has been buzzing with curious life of all ages since early morning.

"I sing about my fears. It's cathartic." Damon Albarn on turning the atmospheres of Iceland and...

Photographs By Matt Cronin Photograph by Matt Cronin ON 26 JANUARY 2017, around 400 people gathered in the church of St Michael and All Angels, in the tiny South Devon village of Stokenham, to mark the centenary of a disaster.

Generosity, grief and the 'black anaconda': Inside the world's biggest annual pilgrimage

The lines start in all corners of the country. People of every age, wearing dark clothes, some holding flags, some dancing, some vocal, some reflective. Groups of men together, groups of women, families. The processions move along roads from every direction, all towards Karbala - which could be anything from a few hours, to over a week's walk away.

Portraits tell the stories of the UK's volunteer vaccinators

Photographs By Matt Davis Zainab Yasmin, 43, London. "I work as a public health programme manager in Tower Hamlets. I'm studying for a masters degree in public health. I joined St John Ambulance in March 2020, but I couldn't start volunteering immediately as I contracted COVID 19.

had been out of signal for most of the day, so when my phone suddenly stirred in my pocket, I decided to have a look. Remembering a climbing maxim - "Don't try to do two things at once" - I shouted for my friend Kingsley to hang on, stopped and took out my mobile.

In an extract from his new book exploring the UK's mountains, Simon Ingram travels to Sutherland, where the land meets the sea and the stag remains king

AUGUST 2019. This facility isn't marked on the industrial estate signage. Perhaps it's because it's new. Or more likely it's because, slid between the names of carpet tile suppliers and kitchen cabinet wholesalers, the premises of a prototype nuclear reactor would raise more than just eyebrows.

Wolf man: Why the life of Jack London was as wild as his books

This week a new cinematic adaptation of The Call of the Wild is released, starring Harrison Ford in the role of John Thornton - a Canadian gold hunter who befriends a dog named Buck against the elemental backdrop of the Klondike gold rush.