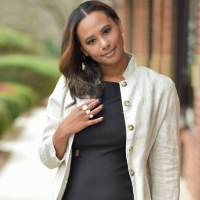 Jacinta Howard is an Atlanta-based culture and music writer and editor, mostly covering hip-hop, soul, R&B, TV/film, travel, and art. Previously, she was the entertainment editor at Upscale Magazine, the music editor at rolling out, a contributing arts and music writer at Creative Loafing-Atlanta, and a contributing editor at The Boombox. Her byline has appeared in many publications including The Source, Uptown Magazine, Shondaland, XXL Magazine, Paste Magazine, Rock The Bells, American Way Magazine, The Asheville Citizen-Times, and Thrillist.

In 2014, she self-published her debut novel, Better Than Okay. It was nominated for a RONE Award, which honors the best in the independent and small press industry. She's since independently published 10 contemporary romance novels, including the USA Today "Must Read" new adult novel, Happiness In Jersey from her popular series, The Prototype. Her books have appeared in OkayAfrica, USA Today, and Book Riot.

Indie Romance Books Are Big Business, But Why Aren't We Hearing About It?

In 2020, it's easy to feel like we're living in a dystopian tale, and many of us are in survival mode. We naturally look to food, water, safety, clean air, masks, jobs, and healthcare for sustenance. But we also look to stories to keep us going.

BY: JACINTA HOWARD PHOTOGRAPHY BY: DEREK BLANKS Hall isn't very good at online Spades, and she's a little upset about it. "I got my ass beat real bad. And got embarrassed," she deadpans, a laugh lurking just beyond her peeved tone. "But I am good!" she insists.

Augusta guide: What to eat, see and do in The Garden City

Augusta has emerged as a hidden jewel of the Southeast-not least because of its proximity to Atlanta, or because it's the home of the pristine Augusta National Golf Course, where the Masters Tournament is played each year.

Goodie Mob Returns to Offer a Survival Kit for the Times

In 1995, Goodie Mob released their debut LP , an album that wasn't only soul-stirring, introspective and wise beyond its years, but one that helped define and establish the soul of Atlanta hip-hop. Deeply familiar in its homegrown wisdom and searing in its socio-political commentary, Soul Food introduced Atlanta natives Big Gipp, Cee-Lo, Khujo and T-Mo as sharp commentators and gatekeepers of the truth.

Nappy Roots On Business, Beer and Building Their Brewery

Fish Scales, one-fourth of the southern rap group, Nappy Roots, is standing behind the bar, pouring a beer. It isn't just any beer though, it's the group's signature stout, Kentucky Mud, and he's pouring it at Nappy Roots' sprawling new 6,000-foot Atlantucky brewery and taproom.

The Most Haunted Places in Georgia

The South is known for its southern charm, especially in places like Charlotte, New Orleans, and Savannah. The latter was founded in 1733, which means thousands flock to Georgia every year to take in the old buildings, walk the historic streets, and get a little taste of what colonial living might have been like.

Beyonce's 'Lemonade' Ain't for Everybody--Which Is Exactly the Point

There's something about having your heart broken, about feeling like it's been ripped out of your chest and cut into tiny pieces, about the air being so heavy it seems like it couldn't possibly pass through your body to give your lungs the oxygen needed for survival, that lends itself to creativity.

A "disrupter" is what she calls herself, and it's a fitting-and well-earned-description. Jemele Hill is a voice of logic whenever those bothersome issues rear their nasty heads in the American social sphere. She's unafraid to stand up to the rich and powerful. Or to amplify the calls of the marginalized or to say what's needed.

Mass transit, mass art: How MARTA acts as a canvas

In June MARTA riders got a surprise on their way through Five Points station. Dancers from local company Moving in the Spirit performed throughout the space, accompanied by cellist Jenn Cornell and percussionist Emrah Kotan.