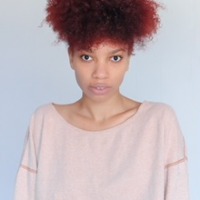 Hello, my name is Chelsea Holmes-McKnight. I'm a screenwriter living in Baltimore, Maryland. I specialize in dramatic content, comedy, and character development. My love of storytelling began in high school and later developed in college after taking my first fiction writing course. I've since gone on to be nominated for the New Orleans Film Festival Screenwriting Competition, as well as producing my own content.

I have written for series such as The C-Word, which is a comedy featured on youtube that has gained over 20,000 views. I have also written and produced my own series entitled Generation-Y that can be viewed on Vimeo starting in May. Aside from writing series, I've also written several short films one of which is in post production and schedule to shoot early August. I love the art of story telling and enjoy developing other peoples ideas.

After discovering that she's contracted an incurable STD, Elisha Danbrooke is forced to navigate the dating world with this stigma.

The Love Theory is a drama that follows the life of a housewife in an unhappy marriage while raising 2 children.